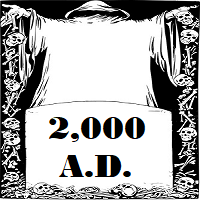 Recently [written in the fall, 1999] I received a scare-mail about  the “mammoth crisis” which the writers claim will result from the “Millennium Bug.” The message reveals that “many faithful Bible students” believe that the “inescapable and irreversible troubles” of the “Millennium Bug Y2K” will usher in “the beginning of the Tribulation.”

Thus have been wed two of the greatest fears of present day evangelicals. The scare-mail writers give the totally false impression that nobody has any idea what to do about the “Millennium Bug.” They say: “…if the world finds the answers to the Y2K crisis before January 1st, 2000…” They totally ignore the millions (will reach into billions) of dollars being spent for new computer programs and equipment and for paying the thousands of technicians who have long been correcting existing programs and testing systems world-wide. For more thoughts on proper reaction to Y2K, refer back to Insight #11.

But, is there a connection between Y2K and “the tribulation”? Indeed, is “the tribulation” just around the corner? The next Insight will explore various Bible truths related to this timely question.