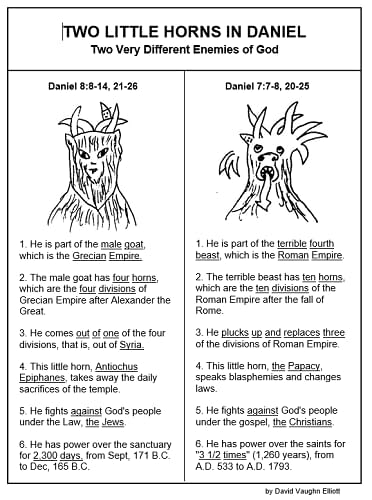 Daniel’s little horns depict big personalities. They play center stage in Daniel 7 and 8. One had “a mouth that spoke very great things.” The other grew to be “very great.” Two “great” little horns.

Countless prophecy teachers today assume that the two little horns are one, ignoring the context of each. The truth is that any careful student of Daniel can easily see the differences. They are two–not one.

The fourth beast of Daniel 7:7,8, has ten horns. A little horn comes up among the ten and subdues three of them. On the other hand, the male goat in Daniel 8:8,9, first has one big horn, then four horns replace it. Later, a little horn comes out of one of these four horns. These details are enough to set apart the little horns. But that is not all.

Most everyone today who believes Daniel, regardless of prophetic leanings, accepts the fourth beast of Daniel 7:7,8 as a prophecy of the Roman Empire. The third beast in 7:6, a leopard, has four heads and four wings. Most accept this as the four-fold division of Greece after the death of Alexander the Great.

And the goat in Daniel 8? The goat first has one big horn–Alexander the Great. When the big horn is broken, four horns come up, a figure comparable to the four heads and four wings of the leopard. Sounds like Greece, doesn’t it? If in doubt, look at 8:21: “And the rough goat is the king of Greece.” That settles it.

One of the easiest things to understand in Daniel is that one little horn is from Rome, while the other is from Greece. Any Bible “teacher” who confuses the two… (well, you finish the sentence).