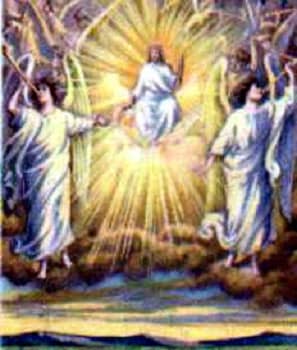 Ever notice the complete title and subtitle of the initial “Left Behind” book? “Left Behind: A Novel of the Earth’s Last Days.” A novel! Indeed! Those who know their Bible have known all along that the fantasies claimed for the “rapture” were just that: a novel.

For example, they claim it will be secret, that the people supposedly left behind on earth will have no understanding of how and why so many people disappeared.

Long before Paul wrote, Jesus had already specifically warned his disciples not to believe the false prophets who would claim His return to be a secret, hidden affair. “Therefore if they say to you, ‘Look, He is in the desert!’ do not go out; or ‘Look, He is in the inner rooms!’ do not believe it. For as the lightning comes from the east and flashes to the west, so also will the coming of the Son of Man be” (Matthew 24:26,27). A very public event for all to witness.

If someone tries to explain to you that Jesus was seen by those “with the eyes of understanding” in 1914, do not believe him. If someone else, just as falsely, tries to convince you that Jesus will secretly snatch away the believers without the world knowing what happened, do not believe him. No TV newsperson will have to tell anybody of the return of Jesus. It will be like the lightning: visible to all. No explanations needed. Everyone will know it is the end.

Novels may be captivating best sellers; but we would be wise to reject them in favor of the all-time-best-seller: the Bible.