Insight #61 — Does the Bible Prophesy about Rome? 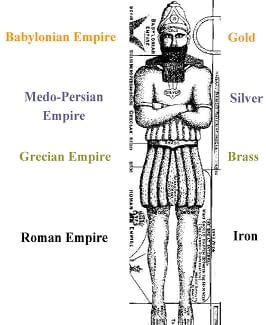 The place to start is with Nebuchadnezzar’s dream of an awesome image… head of gold… chest of silver… belly of brass… legs of iron (Daniel 2). Daniel told him: “You are this head of gold. And after you shall arise another kingdom… and another third kingdom… and the fourth kingdom” (2:38-40).

Daniel said the first kingdom was Nebuchadnezzar, thus Babylon. Daniel 5:28 says the Babylonian kingdom “is divided, and given to the Medes and Persians,” so that is the second kingdom. Daniel 8 (see especially verses 20, 21), foretold Media and Persia being conquered by Greece; so Greece is the third kingdom.

Any student of history knows that the Roman Empire was next on the scene. Thus, Daniel 2 outlines the movement of world empires from the time of Daniel to the time of Christ and beyond: Babylon, Medo-Persia (often just called Persia), Greece and Rome.

In Daniel 7, Daniel is told that four beasts represent four kings (7:17) or kingdoms (7:23). Unlike chapter 2, chapter 7 does not say where to start. However, since both prophecies were made by Daniel during the time of the Babylonian empire, there is every reason to believe the four kingdoms in the two chapters are the same four kingdoms. There is no reason to believe otherwise.

Then in Revelation 13, the first beast has ten horns and is like a leopard, bear and lion. Those are exactly the four beasts of Daniel 7. Surely Revelation is pointing us to Daniel 7. Now, the only kingdom that would have the characteristics of all four kingdoms would be the last one. What can this be but a prophecy of Rome.

These, very briefly, are the initial-foundational reasons why most students of Bible prophecy, though in much disagreement, agree on this: both Daniel and Revelation prophesy much about Rome.