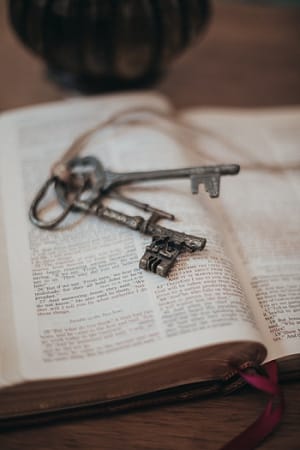 What, then, is Jesus telling Peter in Matthew 16:18,19? “I will build My church… I will give you the keys of the kingdom of heaven, and whatever you bind on earth will be bound in heaven.” Notice 1) In practically the same breath, with no hint of changing subjects, Jesus speaks of the church and the kingdom, apparently equating them. 2) Peter would use the keys to bind “on earth,” thus it was to be done during his lifetime.

Since Jesus promised Peter “the keys of the kingdom,” it is no coincidence that Peter was the leading spokesman on the day of Pentecost. Keys open doors. Once open, others can enter. Thus, Christ designated Peter to unlock the doors, telling people how they could enter the kingdom: “Repent, and be baptized every one of you in the name of Jesus Christ for the remission of sins, and you shall receive the gift of the Holy Spirit” (Acts 2:38). The doors of the kingdom have been open for 2000 years. Those who listen to the holder of the keys are privileged to enter.