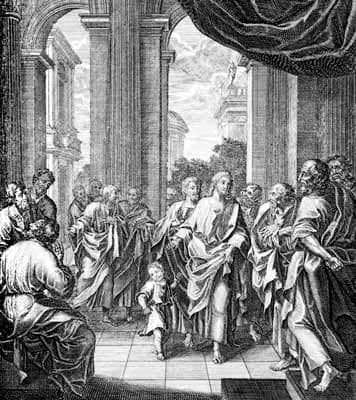 Solomon’s temple was magnificent. Even the floor was covered with gold, not to mention much of the furnishings (1 Kings 6:22-35). However, the glory of the gold was negligible compared to the glory of the Lord in a cloud that filled the temple. So great was that glory that the priests could not work (1 Kings 8:10,11).

Centuries later, following Babylon’s devastation of the temple, the Jews began to rebuild it. In the midst of their efforts, Haggai expressed the viewpoint of the elders in their midst when he said, “Who is left among you that saw this house in her first glory? And how do ye see it now? Is it not in your eyes as nothing in comparison to it?” (Haggai 2:3). They felt the rebuilt temple would be nothing compared to the glory of Solomon’s temple.

Haggai, however, contradicted those feelings by predicting, “The glory of this latter house shall be greater than of the former” (2:9). How would that be? “The desire of all nations shall come: and I will fill this house with glory, says the Lord” (2:7). “The desire of all nations” is a prediction of none other than our Lord Jesus, of whom John testified, “the Word was made flesh . . . and we beheld his glory” (John 1:14). Jesus’ glory was to fill the temple.

Tags:Jerusalem and the TempleSon Of God - Messiah
previousInsight #98 — Angels Curious about Prophetic Fulfillment
nextInsight #100 — Kingdom in the Epistles (kingdom series, 5 of 8)