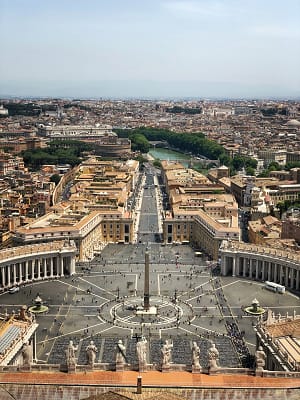 In 2 Thessalonians 2:4, there is a prediction that the “man of sin” would be “setting himself up as God.” Among many other considerations, Insight #74 details 8 ways the pope of Rome sets himself up as God. As a sample, consider the eighth way.

8 – Above the law:  So like God does the Roman Pontiff make himself that he places himself higher than the Son of God. When Jesus was upon earth He voluntarily submitted to taxation (Matthew 17:24-27) as well as to the Jewish council, the Roman Governor Pontius Pilate and the Roman soldiers. He had the power to resist, but He did not.

The “pope” of Rome, however, submits to no man! The “pope” is head of Vatican City, an independent nation also called the Papal State. Vatican City has its own coins, postage stamps and water supply. The Vatican receives ambassadors from about 170 nations (now including the United States–shame!). It is true that Vatican City is tiny compared to the land holdings of the “popes” of the Middle Ages. Nevertheless, it is big enough to furnish the “pope” with absolute independence from all human authority. The reason openly stated for the existence of Vatican City is that the “pope” “cannot rightly be made subject to any temporal power on earth.” Did any man ever “sit as God in the temple of God” more than this?

The Apostle Paul wrote to the very church in question, the church in Rome, during the reign of the infamous emperor Nero. In that setting, Paul commanded the brethren in Rome, “Let every soul be subject to the governing authorities” (Romans 13:1). The “pope” of Rome refuses to obey this command of God. He sets himself outside of and above all earthly authority. In so doing, he sets himself above the very Son of God, who did submit.

You will find an in-depth study of the “man of sin” prophecy in Insight #74.