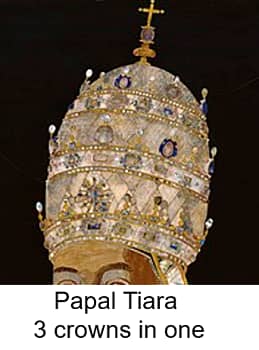 Our evangelical President Bush is the first U.S. president in history to attend a pope’s funeral [4/8/2005] and to order flags flown at half-mast for a pope’s death. Conservative Evangelicals and conservative Catholics are finding much common political ground these days; ignoring spiritual reality in favor of political goals.

For one thing, consider John Paul’s coffin. It was decorated with an “M” for “the Virgin Mary.” Likewise, his papal coat of arms during his reign included both the tiara (three-tiered crown) and a capital “M” for Mary. His motto was “Mary, I am all yours.” It makes me shudder to even write those words! Nothing holy there. Sounds more like blasphemy to me. (Compare 1 Tim. 2:5.)

The Holy Spirit in 2 Cor. 6:14-17 suggests — no, He commands –“Be not unequally yoked together with unbelievers… What agreement has the temple of God with idols? For you are the temple of the living God… Wherefore come out from among them, and be separate, says the Lord.”

Many evangelicals today, rather than separate from idolatrous Rome are rather drawing closer to it. Many do not refuse to call the pope of Rome “holy father.” Rather, they refuse to recognize him as the “man of sin.” However, scriptural correctness does not allow us to ignore this awful reality, as unpopular as it is. It did not use to be unpopular. For centuries, Protestants really did protest. Protest against what? The pope and Rome. That is why they were called Protestants. In the twenty-first century, many no longer protest; rather they pay homage.