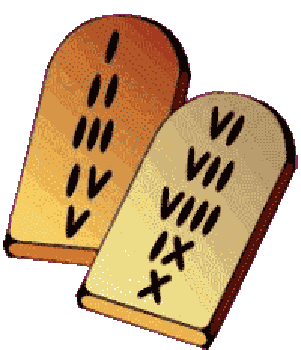 It is commonly believed that the Ten Commandments are the foundation of the U.S. legal system. Absolutely false. For starters, consider these four obvious ones. First Command: “Have no other gods.” Second Command: “not bow down” to “any graven image.” U.S. law is the opposite of both. U.S. law upholds freedom of religion. Fourth Command: “The seventh day [Saturday] is the Sabbath of the Lord your God: in it you shall not do any work.” No U.S. laws here, thank God. Skip to the Tenth: “You shall not covet.” There are no U.S. laws that fine or jail people for coveting. How could there be? Coveting is in the heart.

Many believe that the Ten Commandments are the greatest of all laws. Jesus disagreed. When asked what was the greatest commandment, He did not mention any of the ten (Matt. 22:34-40). He singled out love of God (Deut. 6:5) and love of neighbor (Lev. 19:18) as the basis of “all the law and the prophets.”

God predicted a new covenant. We have a new covenant. Let us not get caught up in the religious world’s frenzy over defending the stone tablets of the old covenant. Jesus nailed the old ordinances to the cross (Col. 2:14).

“The law was given by Moses, but grace and truth came by Jesus Christ” (John 1:17). Let the world, secular and religious, fight it’s own battles over public display of the “ministration of death and condemnation.” We have a new covenant of grace and life that was predicted by the prophets of old. Praise God, Jesus fulfilled those predictions.