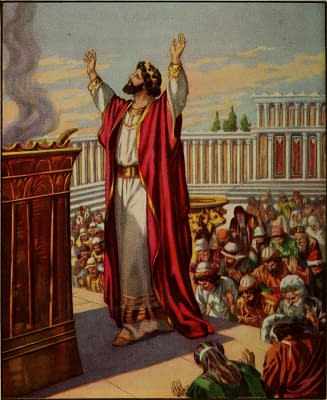 “They” refers to dispensationalists. For years, a major fountain of dispensational doctrine has been Dallas Theological Seminary. Let’s see what “they” say by looking into “The Bible Knowledge Commentary,” written by Dallas faculty, with Ezekiel by Charles Dyer. Dyer introduces chapters 40-48 stating three basic views held by Bible students: 1) Ezekiel predicted the rebuilding of the temple after the Babylonian Captivity; 2) Ezekiel used figurative language to predict the church; and 3) Ezekiel predicted a literal temple to be built during the Millennium.

Dyer dismisses the first view because the rebuilding after the captivity did not fulfill Ezekiel 40-48. Agreed. This leaves us with two opposing views — figurative and literal. Which view applies to Ezekiel 40-48? Let’s examine this general question, leaving the specific question of animal sacrifices for another month.

The figurative (church) view is rejected by Dyer “because it violates the normal meaning of Ezekiel’s words.” Dyer implies that everyone interprets literally Ezekiel’s earlier, now-fulfilled prophecies; so, it is inconsistent, he says, to interpret 40-48 symbolically. But, does everybody — does anybody — interpret all Ezekiel’s earlier prophecies literally? Is the normal meaning of Ezekiel’s words literal? I must reply “no” to both questions.

Ezekiel 9 contains a picturesque scene of a “man clothed in linen” going through Jerusalem to “set a mark upon the foreheads” of those who are upset with the wickedness of Jerusalem. That done, five other men slay all those without a mark. The fulfillment? Dyer says, “The historical fulfillment of this is seen in 2 Chronicles 36:17-19.” Quite so! The fulfillment was by the army of Babylon (see also 2 Kings 25:8-10). The prophecy was fulfilled in history, but not in the literal way it was predicted in Ezekiel 9.

In Ezekiel 37, in a valley full of dry bones, the bones connect to each other, are covered with flesh, are given life, and become a great army. How does Dyer interpret the fulfillment? “The reviving of the dry bones signified Israel’s national restoration… The breath of life the corpses received symbolized the Holy Spirit… It will be fulfilled when God regathers believing Israelites to the land.” Dyer says, “signified… symbolized.” He does not anticipate a literal fulfillment of a valley full of dry bones coming to life.

Ezekiel is filled with figurative, symbolical language: a day for a year (4:6); Israel as a harlot (chap. 16); eagles and vine (chap. 17); lions and vine (chap. 19); parables (20:49; 24:3); two harlots (chap. 23); and, shepherd and sheep (chap 34). Like the entire Bible, Ezekiel is filled with both literal and figurative language. We are talking here about extended figures, not even considering the many brief figures of speech Ezekiel uses.

Nobody takes all of Ezekiel literally, not even Dyer. To say that Ezekiel 40-48 cannot be figurative “because it violates the normal meaning of Ezekiel’s words,” is simply not true. And that is the only reason Dyer offers. Plus, he offers no proof that the chapters must have their fulfillment in “the Millennium.” Ezekiel 40-48 does not mention any millennium. The only time period I have found in these chapters is “for ever” (43:7-9).