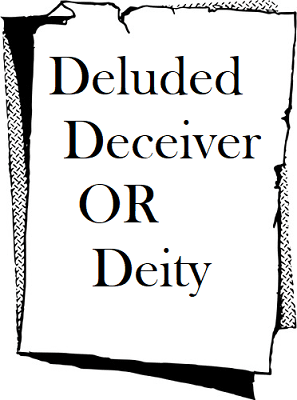 He was stirring up the masses, making wild claims. The chief priests tried to stop him, but the arresting officers, captivated by his teaching, returned empty handed.(1) One day, one of his disciples agreed with the chief priests to deliver him into their hands.(2) In the darkness of night, on the outskirts of Jerusalem, Judas betrayed his master with a kiss. Jesus did not resist the arrest. He knew his time had come.(3)

During the trial, the high priest asked: “Are you the Christ, the Son of the Blessed?” Jesus not only replied in the affirmative, but added: “You shall see the Son of man sitting on the right hand of power, and coming in the clouds of heaven.”(4) That was it. The high priest declared Jesus had blasphemed. The council agreed and took him to Pilate, saying: “We have a law, and by our law he ought to die, because he made himself the Son of God.”(5)

Ought to die? What was going on? Those religious authorities clearly understood that Jesus was claiming deity, and they absolutely rejected it. To them, Jesus was a blasphemer, and their law stipulated death.(6) Who was right — Jesus or the clergy? Was Jesus deity, or was he a blasphemer, either lying or deluded?

The Jews were divided. Some insisted he had a demon and was insane, out of his mind. Others countered that a demon could neither talk nor work miracles as Jesus did.(7) All these people understood the issues. Do we?

We have to make up our minds about Jesus.
Here are the choices:

Choice 2: Jesus was a liar. He was deliberately deceiving the people. Nobody can rightly claim that Jesus was a great moral teacher if he was lying about being the Son of God. No good moral teacher in his right mind would make such a claim — if he was only a human being.

Those are the choices the Jews faced; and they are the choices we all face today. Was Jesus deluded, a deceiver, or deity? There is no middle ground. To view Jesus as one of the world’s greatest teachers of high moral standards, but not the divine Son of God is in itself a delusion. It is dodging the issue. We must make a choice. Eternity hangs in the balance.