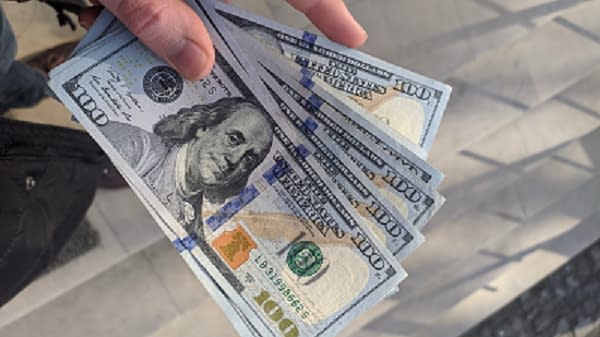 What could you do with a dollar bill? Not much. Well, how about a twenty-dollar bill? You could buy one meal at a mid-range restaurant. You could fill your tank half full, or a third. Not much. You need money, don’t you? Lots of it.

Money is essential in modern society. So you spend gobs of hours working to obtain some. Or someone works for you. We can’t live without it.

But, how important are dollars? Since they are essential, is there anything more important? If you are a Christian, you know. Can we name some things that are more important? Let’s work on a list based on what a very wise and rich man had to say. That’s right. The book of Proverbs. (All the texts in this Insight are taken from Proverbs, unless identified otherwise.)

They say that money talks. Yes, it does. But what does it say? Well, among other things, it says a whole lot about you and about me. It talks about what is important in my life and your life. What is money saying about you, about me?

Love and Quietness Better than Money

“Better is a dish of vegetables where love is than a fattened ox served with hatred” (15:17). I suppose we can agree that this text is not talking about choosing a vegetarian diet. Rather, it is graphically reflecting what your money is able to put on the table. This next text makes the point more clearly: “Better is a dry morsel and quietness with it than a house full of feasting with strife” (17:1).

Let’s bring this right down to your dinner table. Not so much my dinner table since I now live alone, and that’s undoubtedly true of some of you. But for the majority, who live with family members, what’s it like at your dinner table? Hey, do you even have such a place? Nowadays, some families find it hard to juggle their varied schedules so that they can live like a family. Others scatter to watch TV, play on their smartphone, or whatever. “A dish of vegetables where love is” seems to imply sharing that dish, right? Families that are serious about being families do all they can to have at least one meal each day where the entire family sits together and experiences love. TV off. Smartphones off. Perhaps even the landline off. Just the family being family.

And the verse says “quietness” vs. “strife.” That doesn’t mean silence. It is a time of sharing with love. Back to where we started. If your job(s) making money get in the way of this scene, is it not time to evaluate which is better? If you bring home the “ox” (bacon) but have not time for family love, then your family would do better with less bacon, right? This is not meant as a judgment. It is meant for reflection on what, really, is more important.

Various companies today have a tendency to try to “own” their employees. I think we all know that many (most?) companies are far more interested in their bottom line than in the “bottom line” of your life with God. Your bottom line is that money is only a means, not an end in itself. Love and quietness are better than salary, stocks and bonds, houses and lands. The texts cited are saying that making more money to buy more food cannot trump living in a house full of love and quietness.

That second text is too short and direct, right? Honesty in making money is not a new issue. It clearly was an issue 3,000 years ago. How do we make money? What do we do on the job? Do our tax returns tell the truth?

They say that honesty pays. Reminds me of taking my car in for an evaluation many long years ago. Oil leak. I was told it might be an expensive job. They had to check it out. When I returned, it was already fixed and cost less than $100. Just an O-ring on the distributor shaft. I could have been charged several hundred dollars and not known the difference. You can be sure this mechanic’s honesty paid off by gaining my confidence in his integrity.

But what if honesty does not pay off in the short term? What if you lose your job for refusing to lie for your employer — or for the other workers? I am reminded of a brother who was hired to work in the mail room of the very large main NYC public library. He had to fill out reports on the number of mail pieces handled daily. As a Christian, he filled the reports honestly. His coworkers urged him to inflate his reports, as they all did, for job protection. If they reported the truth, it might be clear that fewer workers were needed, and thus someone could lose their job. He refused to cave in to peer pressure. He was committed to the truth wherever it led. Thankfully, he did not lose his job. But he was willing to lose it. He knew that honesty paid in the long term — with the Creator and Judge of heaven and earth.

The first of the three texts said, “Better is a little with righteousness than great income with injustice.” Too often people separate Sunday from the rest of the week. “I do what I have to do to make a living.” Yes, money is necessary. But so are righteousness and integrity. The verses are very plain. Too plain? A Christian will carefully consider what is involved in any job offer. We will not all agree on every decision as to whether a particular job is acceptable for a Christian or not. Each Christian must make his or her own decision. Nonetheless, the decision needs to be made after careful consideration and prayer regarding what is and what is not acceptable to God.

Surely you have heard stories of code violations that caused injury or even death. You certainly know of sales pitches laced with lies. Then there are all those recalls because of shoddy labor. And on and on. Thank God for honest businesses and workers. Thank God for those who do a day’s work to obtain a day’s pay. Thank God for those who do not divorce their integrity from whatever they do for a living. “For a living” we say when we mean “to earn money.” “For a living” seems much more aligned with righteousness, truth, and integrity. That’s getting at the heart of “living.”

Wisdom and Fear of God Better than Money

“How much better it is to get wisdom than gold! And to get understanding is to be chosen above silver” (16:16).
“Better is a little with the fear of the Lord than great treasure and turmoil with it” (15:16).

Many are the verses in Proverbs that speak of wisdom being better than gold, silver, jewels, and hidden treasures. You may have your favorite. Indeed, this is the underlying theme of the entire book — whether called wisdom, knowledge, discernment, understanding, or other synonyms. “The fear of the Lord is the beginning of knowledge” (1:7). If you know 1 John 4:18, you’ll tell me that love trumps fear. You’re right. Proverbs doesn’t say that fear is the end of knowledge; it says it is the beginning. And 1 John says that “perfect love casts out fear.” Call it fear, respect, reverence, or whatever you want to call it — an awareness that God is God, that God is the Creator and King of the universe, that God is our Judge, that “God so loved the world, that He gave His only begotten Son,” that “God is love” — all of this and more is “better” than stocks and bonds, better than 401(k)s, better than paychecks, better than houses and lands, and better than anything else money can buy.

Since many things in life are better than money, we should pay more attention to their attainment and less attention to making more money. “No one can serve two masters; for either he will hate the one and love the other, or he will be devoted to one and despise the other. You cannot serve God and wealth” (Matt. 6:24). The final word has been translated in various versions as “mammon” (a transliteration of the Greek), “money,” “riches,” “wealth,” and “gold.” Then there is Jesus’ well-known saying: “Seek first His kingdom and His righteousness, and all these things will be added to you” (Matt. 6:33). The context of “these things” (vss. 25-33) is simply food and clothes, not a multitude of things we would call “necessities,” much less all our luxuries.

Back in Proverbs in a context regarding wisdom, discernment, understanding, and knowledge, Prov. 2:4 says, “If you seek her as silver and search for her as for hidden treasures.” That speaks of spending time and effort in search of the things of God. It causes us to think of priorities. Yes, we have to work to pay the bills. Do you also have to seek the things of God? How much time and effort do you and I spend in getting closer to God, in gaining a knowledge of Him? Are we striving to keep up with the Joneses? Or are you striving to keep up with Timothy and Mary and Job, to name a few?