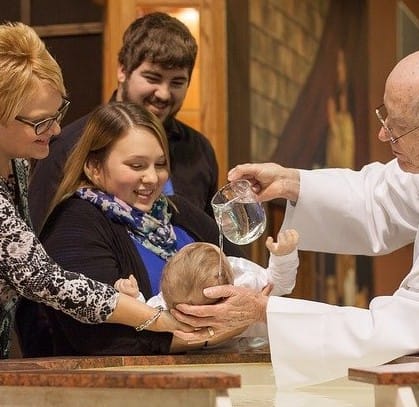 Why do some churches baptize infants? Some do it to cleanse the infant of original sin. Others consider baptism a sign of entrance into God’s covenant community. The former concept was discussed in Insight #259. Today we will examine the latter, especially as it relates to household baptisms and circumcision.

A few times in Scripture we read of the conversion and salvation of everyone in a house or household. Specifically, it is sometimes recorded that everyone in the house was baptized. Can we infer from this that there must have been infants in the house and therefore that we have evidence of infant baptism?

One day an angel told Cornelius that Peter “will speak to you words by which you will be saved, you and all your house” (Acts 11:14). (For the full account read Acts 10:1 to 11:18.) Who is included in “all your house”? In 10:2 we are told that Cornelius “feared God with all his house.” Since infants can’t fear God, they are out of consideration. In 10:33, Cornelius tells Peter, “We are all here present in the sight of God to hear all things that have been commanded you by God.” Infants are incapable of hearing God’s message in any meaningful way, so they are not considered in those “present.” Peter later explained regarding Jesus, “Everyone who believes in him will receive remission of sins” (10:43). Belief excludes infants. The final word on this occasion is that “God has also granted to the Gentiles repentance to life!” (11:18). Infants can’t repent. Nothing in Acts 10-11 applies to infants, whether any were present or not.

In Acts 16:31-34, the Philippian jailer is told: “‘Believe in the Lord Jesus Christ, and you will be saved, you and your household.” As the jailer would be saved by believing, so the household members likewise would individually be saved by believing. Continuing the text, “They spoke the word of the Lord to him, and to all who were in his house… and was immediately baptized, he and all his household.” You cannot meaningfully speak the word of the Lord to infants, so infants are excluded from consideration, whether there were any present or not.

Praise the Lord when entire households turn their lives over to Jesus. But Jesus said, “He who disbelieves will be condemned” (Mark 16:16). He didn’t add, “unless the head of your house believes for you.” In fact, Jesus predicted, “For I came to set a man at odds against his father… A man’s foes will be those of his own household” (Matt. 10:35-36). Rev. 20:13 says the final judgment will be “each one according to his works.” The cases of household conversions are about salvation through hearing, believing, and repenting before baptism. People may influence other people, but in the end each person must make their own decision – something infants can’t do.

The issue of household baptism is closely tied to the concept that baptism is not for remission of sin but rather that it is a sign of entrance into the new covenant community. Baptism, in this view, is linked to the OT sign of circumcision. But…

Circumcision was national, not familial
Household conversions in the NT are exactly that: individual households or families found in scattered locations throughout “all nations” (Matt. 28:19). Yes, circumcision began with one family, Abraham’s. Then it spread – but not to families in many nations – rather to the descendants of Abraham. Not even to all his descendants, but only through his son and grandson, Isaac and Jacob.

Four hundred years later, Moses declared to the children of Israel: “Jehovah your God has chosen you to be a people for his own possession, above all peoples who are on the face of the earth” (Deut. 7:6). The entire OT is built around one nation, Israel, God’s chosen nation to bring Jesus into the world.

Circumcision was given as a covenant sign –
Not for forgiveness of sin
Circumcision is called both a covenant and a token (sign) of the covenant as we saw in Genesis 17. I know of no Scripture that connects physical circumcision with salvation. Baptism, on the other hand, is never called a covenant or a sign, Rather, in both household examples above, the issue is specifically “you will be saved.” In that context, baptism took place immediately following hearing, believing, and repenting.

With comparisons we must examine what is compared and what is not. There is nothing in this text about covenant signs. The comparison is between literal cutting off flesh in circumcision and “the putting off of the body of the sins of the flesh” in baptism “in the circumcision not made with hands… the circumcision of Christ.” Physical circumcision had nothing to do with putting off sin. Baptism does: “having forgiven us all our trespasses.” The text says those baptized “were also raised with him through faith in the working of God.” Baptism involves faith in God’s working. That eliminates infant baptism. Circumcision was done to infants who were incapable of faith.

Circumcision was for males only, not for females
If baptism is the sign of the New Covenant in the same manner that circumcision was the sign of the Old Covenant, then baby girls should not be baptized. If a person says, “But that’s different in the New Covenant.” Absolutely! There are so many things that are different in the New Covenant! Christ “has obtained a more excellent ministry, by so much as he is also the mediator of a better covenant… For if that first covenant had been faultless, then no place would have been sought for a second” (Heb. 8:6-7). Our New Covenant should not be confused with the old one.

Most Infant “Baptisms” Are Not Baptisms

What is baptism? What does the word mean in the Greek? Virtually no Bible translates the Greek for this word. Rather, they transliterate Greek baptizo into “baptize” and baptisma into “baptism.” The Greek means to dip or immerse. Figuratively, it means to overwhelm, as we would say “over my head in debt.” It may mean “to wash” but with dipping in view. You don’t “wash” a plate – in any language – by pouring a bit of water on an edge.

This Greek meaning is clear in the English context. We already saw “buried with him in baptism” (Col. 2:12). Romans 6 adds: “All we who were baptized into Christ Jesus were baptized into his death. We were buried therefore with him through baptism to death, that just like Christ was raised from the dead through the glory of the Father, so we also might walk in newness of life” (6:3-4). Who would “bury” a dead dog by sprinkling a handful of dirt on it?

According to both the Greek and English, what Matthew 28:19 really says is: “Go, and make disciples of all nations, immersing them in the name of the Father and of the Son and of the Holy Spirit.”

Baptism is not a meaningless application of a tiny bit of water. The physical act of immersion in water portrays the death, burial, and resurrection of Jesus by which forgiveness of sin is possible. At the same time, it pictures the spiritual reality of the person being baptized. Having believed and repented, the person is dying to sin, burying the “old man” of sin in a watery grave, and then arising to walk in a new life. Only voluntary immersion in water depicts this doubly beautiful picture.

Have you heard, believed, and repented of your sins, followed by immersion in water for the forgiveness of those sins and to receive the gift of the Holy Spirit? (See Acts 2:37-41.)