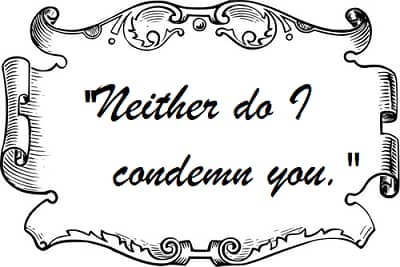 “People who live in glass houses shouldn’t throw stones.” “He who is without sin among you, let him throw the first stone.” Two picturesque proverbs expressing the same thought, right? Wrong. Yes, the first one is an old proverb using figurative language. But the second one is not a figure of speech. Jesus was speaking of literal stones to literally kill. Let’s examine this.

A group of scribes and Pharisees (the Jewish equivalent of clergy today) confronted Jesus with a woman caught in adultery. Their motives were anything but spiritual. They were aiming to trap Jesus between the law of Moses and the law of the Romans. “In our law, Moses commanded us to stone such. What then do you say?” (The entire account is found in John 8:3-11.) “It is not lawful for us [Jews under Romans] to put anyone to death” (John 18:31).

Moses’ law was clear: “He who commits adultery with his neighbor’s wife, the adulterer and the adulteress shall surely be put to death” (Lev. 20:10). The common method of execution? “You shall stone him to death with stones” (Deut. 13:10). We are not talking here about figurative stones. The issue is capital punishment. In another case the Law said: “You shall stone them to death with stones… The hand of the witnesses shall be first on him to put him to death” (Deut. 17:5-7). Jesus turned it from the witnesses being first to the one without sin being first.

The whole scene is about capital punishment. The religious leaders thought they could maneuver Jesus into deep trouble either way. Either He would be guilty of disobeying God’s Law through Moses, or He would be in defiance of the Romans who ruled over them at that time.

“Neither do I condemn you”

“Woman, where are your accusers? Did no one condemn you?… Neither do I condemn you.”

The word “condemn” has two major meanings. In today’s English, the first definition is to censure, blame, consider wrong, as in “You’re always condemning people for the smallest things.” The second is to pronounce legal sentence, as in “The judge condemned him to the electric chair.” In Greek, as well as English, the context shows us which meaning is intended.

When we interpret “condemn” in this text as simply to blame or consider being wrong, we abuse Jesus’ words. There is absolutely no question about the woman’s guilt. Everyone present knew the commandment “You shall not commit adultery” (Ex. 20:14). This was not the issue. At issue was the death penalty. Jesus did not condemn the woman to death.

Jesus was not soft-peddling adultery. Indeed, Jesus in His ministry added to what was considered adultery: “Whoever divorces his wife, except for sexual immorality, and marries another, commits adultery” (Matt. 19:9). So now under Jesus, even a legal divorce followed by a legal marriage constitutes adultery if the basis for the divorce is anything other than sexual immorality (fornication, unfaithfulness). And Jesus’ warning to “sin no more” assumes that her adultery was indeed sin.

Jesus Was Introducing a New Covenant

When Jesus said, “Neither do I condemn you,” He did not mean that it was okay, no big deal, or nothing to be concerned about. Downplaying is one thing. Offering a second opportunity through mercy and grace is a very different matter.

John 1:17 can help us get on the right track here. “For the law was given through Moses. Grace and truth were realized through Jesus Christ.” Jesus, during His lifetime on earth, was ushering in huge changes. He was introducing a New Covenant. He lived and died under the Old Covenant, but many of His teachings and practices were preludes to the New, which would take effect following His ascension. Under the Old Covenant, Israel was a theocratic nation commanded to apply the death penalty for numerous sins. Under the New Covenant, grace and forgiveness are offered through the gospel.

Jesus was not belittling sin. He was introducing grace. He was offering forgiveness of sin. This ultimately meant that Jesus would be the one to suffer the death penalty. He, not us, would be the one to die for sin. Praise God that “there is therefore now no condemnation to those who are in Christ Jesus… For what the law couldn’t do… God did, sending his own Son in the likeness of sinful flesh and for sin, he condemned sin in the flesh… It is God who justifies. Who is he who condemns?” (Rom. 8:1-3, 33-34).

We all know John 3:16. Verse 17 is not as well known. “For God sent not his Son into the world to condemn the world; but that the world through him might be saved.” Centuries earlier, God turned “the cities of Sodom and Gomorrah into ashes, condemned them to destruction” (2 Pet. 2:6). Jesus did not come to kill and destroy the wicked. Rather, He came to offer Himself as a sacrifice for your sins and my sins.

Does all this mean God is more lenient today? Does it mean that sin is not as big a deal today? Is it saying that God was strict and tough in the OT, but now He is loose and soft? Before Jesus left this planet He said, “He who believes and is baptized will be saved; but he who disbelieves will be condemned” (Mark 16:16). Grace now. But if grace is rejected, future condemnation awaits.

The book of Hebrews warns of something worse than capital punishment: “A man who disregards Moses’ law dies without compassion on the word of two or three witnesses. How much worse punishment, do you think, will he be judged worthy of, who has trodden under foot the Son of God… It is a fearful thing to fall into the hands of the living God” (Heb. 10:28-31).

Tags:Jesus' Connection to OthersOld vs. New Testament
previousInsight #288 – Who Crucified Jesus?
nextInsight #290 – How Can I Understand the Bible?