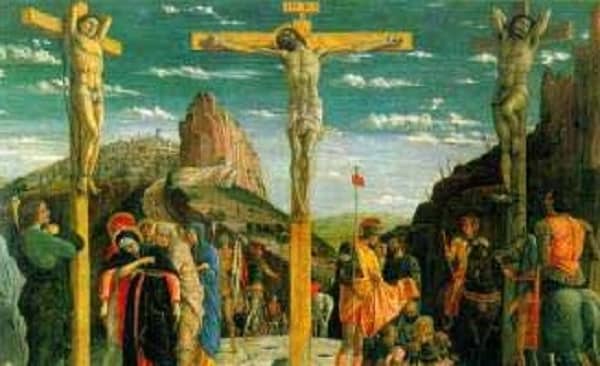 Nailed to the middle cross was Jesus. One of the thieves, with faith in Jesus pleaded, “Lord, remember me when you come into your Kingdom.” Jesus, in the midst of His own anguish, replied, “Today you will be with me in Paradise” (Luke 23:39-43). The robber confessed Jesus as Lord, died, and went with Jesus to Paradise.

Zacchaeus was so convicted by Jesus that he told Him, “Lord, half of my goods I give to the poor.” Jesus responded, “Today, salvation has come to this house” (Luke 19:1-10). No baptism.

An unnamed rich ruler asked Jesus, “What shall I do to inherit eternal life?” After a little discussion, Jesus told him, “Sell all that you have, and distribute it to the poor. You will have treasure in heaven” (Luke 18:18-27). Nothing about baptism.

Jesus and other guests were dining in a Pharisee’s house. They didn’t sit at tables; they reclined. “A woman… standing behind at his feet weeping, she began to wet his feet with her tears, and she wiped them with the hair of her head, kissed his feet, and anointed them with the ointment.” Jesus said to the woman, “Your sins are forgiven… Your faith has saved you.” The guests thought, “Who is this who even forgives sins?” (Luke 7:36-50). That is a vital question that is key to the whole matter.

A paralyzed man on a cot was let down from the roof in front of Jesus. The first thing Jesus said was, “Man, your sins are forgiven you.” The Pharisees considered that Jesus had blasphemed. And if Jesus were just another prophet, they would have been correct. Jesus responded: “‘That you may know that the Son of Man has authority on earth to forgive sins’ (he said to the paralyzed man), ‘I tell you, arise, and take up your cot, and go to your house.’ Immediately he rose up before them, and took up that which he was laying on, and departed to his house” (Luke 5:17-26).

Now we have the key to understanding all five examples. “The Son of Man has authority on earth to forgive sins.” Jesus has the authority! Jesus is the Savior as His name indicates: “You shall call his name Jesus, for it is he who shall save his people from their sins” (Matthew 1:21). None of the five examples relate directly to us. No! The five cases are each different from one another and different from us. Jesus, the Savior, had the authority to forgive sins – as He considered each case separately.

Baptism Command Not Yet Given

The command to baptize in the name of the Father, Son, and Holy Spirit did not exist during Jesus’ ministry. Yes, there was the baptism of John, but we learn in Acts 18:24 to 19:7 that John’s baptism was no longer valid after Jesus left the earth.

The baptism that is valid today was first commanded by Jesus after His resurrection. “All authority has been given to me in heaven and on earth. Go, and make disciples of all nations, baptizing them in the name of the Father and of the Son and of the Holy Spirit, teaching them to observe all things that I commanded you” (Matthew 28:18-20). In Mark 16:15-16 we read: “Go into all the world, and preach the Good News to the whole creation. He who believes and is baptized will be saved; but he who disbelieves will be condemned.” A few days later, Peter, whom Jesus baptized in the Holy Spirit (Acts 1:5) and to whom Jesus gave the keys of the kingdom (Matthew 16:19), proclaimed: “Repent, and be baptized, every one of you, in the name of Jesus Christ for the forgiveness of sins, and you will receive the gift of the Holy Spirit” (Acts 2:38). Notice that the only specific item mentioned in all three of these texts is baptism.

As a matter of fact, the issue is even larger than just the command to be baptized. Jesus lived under the Old Testament Law, as it says in Galatians 4:4: “God sent out his Son, born to a woman, born under the law.” The five cases in Luke were under the Law, the Old Covenant or Testament. Thus, their specifics do not apply to us. On the cross, when Jesus made the promise to the thief, Jesus had not yet died. Speaking of the two testaments, Hebrews 9:16-17 says, “For where a last will and testament is, there must of necessity be the death of him who made it. For a will is in force where there has been death, for it is never in force while he who made it lives.”

In short, the thief on the cross lived and died under the Old Testament law, before the New Testament command of baptism was given.

Jesus Has the Authority – Not Us

Before Jesus gave the command to baptize, He had the authority to grant salvation to the thief on the cross, as well as to any others. Since He is Deity and the Savior, He could save anyone on the terms that He set for that person.

Today, now that Jesus is no longer physically with us, we have seen in Matthew, Mark, and Acts that Jesus has commanded us to baptize people who believe and repent in order to be “saved,” “for the forgiveness of sin,” and to “receive the gift of the Holy Spirit.” Since Jesus has told us how people are to be saved once He went to heaven, no one has any authority to offer salvation to anyone on any other terms.

Jesus has all authority in heaven and on earth. We don’t. It is a question of what He says, both directly and through His inspired apostles. It is not what some priest or pastor or international evangelist says. It is what Jesus says. He is the Savior with the authority.

Regarding a last will and testament, no matter what is in my will, I can do whatever I want to do with my possessions while I am still alive. But when I die, the will is set. No one can change it. It is the same with Jesus’ last will and testament. While He was still alive (in this world), He was the Savior and could dispense salvation as He knew people’s hearts. But once He died, His will was set – and no man has the authority to alter it with different terms of salvation.

The Thief Was Saved Before Jesus’ Death for Sins

Why did Jesus die? The clearest, shortest answer is found in 1 Corinthians 15:3: “Christ died for our sins.” When all the examples in Luke took place, Jesus had not yet died for the forgiveness of sin. In the case of the thief, Jesus was dying; but He was not yet dead. The basis of the gospel – the death, burial, and resurrection of Jesus (1 Corinthians 15:1-4) – was not yet historical reality.

Any salvation offered before Jesus’ death is no indication of how we are to be saved today. Simply put, before Jesus’ death, people were living under the Old Covenant and had no more obligation to be baptized than did Moses or Solomon or David or Daniel. In Romans 6 we read of the baptism of the New Testament. Among other things, “All we who were baptized into Christ Jesus were baptized into his death.” That couldn’t happen before He died.

Even if the command had existed, it is obvious that a man nailed to a cross could not be baptized. What then? In John 5:22, Jesus said, “The Father judges no one, but he has given all judgment to the Son.” Jesus is not only the Savior, He is the Judge. Not you, not me, not anyone on earth.

Someone says, “What if a person is in the desert with no water to get baptized?” “What if someone is on the way to get baptized and dies in a car accident?” Since we are not the Judge, we can safely leave such cases in Jesus’ hands. He is the Judge. He will do what is right.

The fact that someone cannot do something is never an excuse for those who can. In addition to all the other considerations we have looked at, that which the dying thief was unable to do tells me nothing about what I am able to do. Jesus has never given anybody alive today the authority to promise salvation to people in any way contrary to what His New Testament dictates.

Salvation for Us Today

Yes, we are saved by faith – but not by faith alone. Listen to Jesus. He is the only Savior with authority to forgive sin. “Not everyone who says to me, ‘Lord, Lord,’ will enter into the Kingdom of Heaven; but he who does the will of my Father who is in heaven (Matthew 7:21). The Savior’s will and command for us is, “He who believes and is baptized will be saved.” His apostle, to whom He gave the keys of the kingdom and whom He baptized in the Holy Spirit, said, “Repent, and be baptized, every one of you, in the name of Jesus Christ for the forgiveness of sins, and you will receive the gift of the Holy Spirit.”

We dare not use the thief on the cross as a basis to contradict the New Covenant which came into force after Jesus’ death, burial, and resurrection.

Tags:Jesus' ChurchOld vs. New Testament
previousInsight #294 – “God… Is Able… But…”
nextInsight #296 – The Church as the Body of Christ