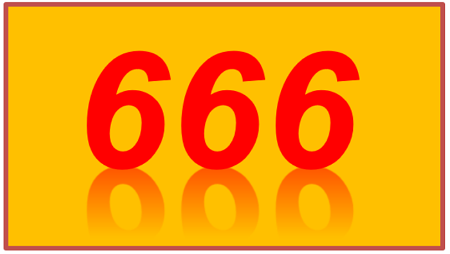 As seen last time, 666 does not have any mystical meaning. Rather, Jesus presents us with a math puzzle. He tells us to “calculate.” Revelation 13:17-18 can be summarized like this: The beast has a man’s name, and that name has the number 666. Names have numbers? Let’s explore how that works.

How Can You Calculate the Number of a Name?

Most familiar to us are Roman numerals, although we may struggle to read them. For example, MDCCCLXXXVIII is 1888. The letter I equals 1, V equals 5, X equals 10, etc. The Romans of old used only seven letters of their Latin alphabet to express numbers. The other letters had no numerical value.

The Greeks used individual letters of their alphabet to express values from 1 to 9, then 10 to 90 by tens, and finally 100 to 900 by hundreds – a total of twenty-seven numbers to express any value from 1 to 999. They had to add three symbols to their twenty-four-letter alphabet to complete this set of twenty-seven numbers. The Hebrews did a similar thing, but when they reached the end of their twenty-two-letter alphabet, they simply stopped with the last letter, which had the value of 400.

Calculating the numerical value of names was common among the ancients. For example, Egyptian mystics spoke of their god Thoth as 1218, using the Greek letters of the name. The ancients did not have to ponder what to do when they were told to calculate the number of a name.

Of course, in any language with that system, many names would have the same value. So, a name with the value of 666 is only a part of the solution. Whatever name is found with a value of 666 must also fit the other circumstances predicted in Revelation 13.

Absurd calculations of 666 are sometimes given using English letters. For example, some invent a system where “a” equals 1, “b” equals 2, etc. But that is fiction. English letters have no numerical value.

Surely the only languages to be given serious consideration are Greek, Hebrew, and Latin. They were leading languages in the first century as was seen on Jesus’ cross (John 19:20). All three use letters for numbers. And of the three, there are good reasons to settle on Greek.

First of all, Revelation was written in Greek. The most natural thing is to calculate in the language that tells us to.

Finally, early Christian writers who wrote about 666 unanimously used the Greek language to attempt to decipher it. E. B. Elliott, in his scholarly commentary on Revelation (written around 1850), said he was not aware of any writer in the first six centuries using anything but Greek in their attempts to solve 666.

As early as the second century, Irenaeus (130 to 202 A.D.) seriously searched for Greek names with the numerical value of 666. Irenaeus stressed the need to learn the name in order to be forewarned. And he realized that the name must harmonize with the rest of the prophecy. He said the prophecies could not be fulfilled until the Roman Empire was broken into ten parts. Listen to Irenaeus:

“The number of the name of the beast, [if reckoned] according to the Greek mode of calculation by the [value of] the letters contained in it, will amount to six hundred and sixty and six… let them await, in the first place, the division of the kingdom into ten… many names can be found possessing the number mentioned… Then also Lateinos has the number six hundred and sixty-six; and it is a very probable [solution], this being the name of the last kingdom [of the four seen by Daniel]. For the Latins are they who at present bear rule: I will not, however, make any boast over this [coincidence]… he [John] indicates the number of the name now, that when this man comes we may avoid him” (Irenaeus, Against Heresies, 5.30.1-4).

Since Irenaeus wrote in Greek, he took it for granted that his readers could easily verify the calculations without his help. For those of us unacquainted with Greek, it is helpful and interesting to see the specifics that are detailed in the following chart.

Irenaeus understood that he lived during the fourth kingdom predicted by Daniel: Rome. He could see how the beasts in Revelation 13 and 17 connected to Daniel, so that Rome was also indicated in Revelation. (Most students today likewise see the Roman connection.) Irenaeus recognized that there were events still in his future as Rev. 17:12 says: “The ten horns that you saw are ten kings who have received no kingdom as yet.” Combining this text with Dan. 7:24 (and context), Irenaeus understood the Roman Empire had to be broken into ten parts before the predicted enemy would arrive. He saw that the number of this wicked one’s name would equal 666.

Irenaeus lived during a part of the fulfillment of Revelation 13 but before the fulfillment of other parts. Situated in that historical context, he found it significant that the name of the kingdom then in power had the value of 666 in Greek. He did not claim that Lateinos was the definite solution of 666, but only a possibility. It was too early in time for him to be definitive. Today, with centuries of history behind us, many of us believe that there never has been a better solution to 666 than this one that Irenaeus suggested.

So, if Lateinos is the unexciting solution to 666, of what significance is that? How does that fit in with the rest of Revelation 13? What is the fulfillment we should look for? Tune in next time.