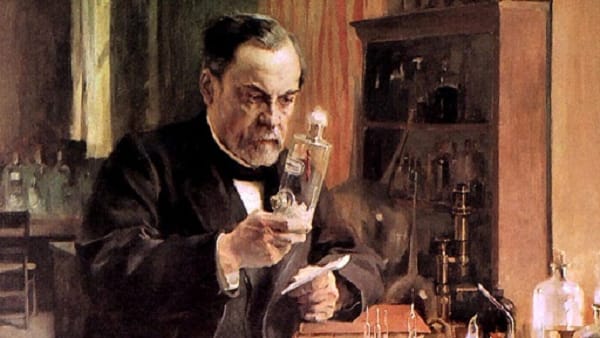 In olden times, both educated and uneducated people believed in spontaneous generation: the idea that life comes from nonlife. There was such “evidence” as maggots appearing on rotting meat and mice appearing in stored molding grain. (Hey, has your garbage ever “produced” fruit flies?)

Not until the seventeenth century did Francesco Redi disprove the prevailing idea that rotting meat produces maggots. When he put rotting meat in a jar and covered it with gauze, guess what happened. The flies smelled the meat and laid their eggs on the gauze. Maggots appeared on the gauze but not on the meat.

It took Louis Pasteur (1822-1895) to demonstrate that even microorganisms (bacteria, germs) do not sprout out of nothing. He proved that bacteria can travel even on tiny dust particles in the air. In his famous experiment (Google it for more detail), he placed broth in swan-necked (s-shaped) flasks. The flasks were then sterilized with heat. In other open flasks the sterilized broth was soon contaminated. The swan-necked flasks allowed in air but trapped falling dust particles. Result? The broth in the swan-necked flasks remained microbe free. It was a defining experiment that put the final nail in the coffin of spontaneous generation.

France had large beer and wine industries. In their struggles with bad fermentation they turned to Pasteur. To make a long story short, Pasteur learned that the proper amount of heat for the proper amount of time could destroy unwanted bacteria while preserving helpful (or at least not dangerous) bacteria. He patented his method, which became known as pasteurization. We know the term mainly related to milk, but the method is used in all kinds of prepared foods we buy today. “Refrigerate when opened” tells us the contents have been pasteurized (sanitized by heat).

We owe our knowledge that germs cause disease to Pasteur. He is also famous for his work with vaccines, another story on its own. It was not long after Pasteur’s work that Joseph Lister applied this knowledge to medicine, introducing antiseptics and saving millions of lives to this day. Listerine is named after him.

We are indebted to Louis Pasteur for many of the health and sanitation standards we take for granted today. But this Insight is not a reminder to wash your hands. Rather, it’s about Louis Pasteur scientifically proving that life as we know it today comes from life. That scientific fact remains scientific fact to this day.

Enter Aldous Huxley. Since the term “spontaneous generation” was debunked, it was time to invent a new term with a slightly altered meaning: abiogenesis. Abiogenesis agrees that life does not come from nonlife – on the earth as it is today. However, it claims that once upon a time, with the assistance of billions of years and different conditions, life did come from non-living matter.

In more recent times, although origin-of-life researchers around the world have spent untold amounts of money and countless man-years of effort, they have been unable to demonstrate life coming from nonlife. In other words, there is absolutely no evidence of life coming from nonlife. Materialistic people (scientists and non-scientists alike) hang on to abiogenesis as a matter of faith.

Most of the talk nowadays about missing links deals with bones, skeletons. But there are much more important missing links in the theory of evolution that have nothing to do with bones. The first and biggest missing link is getting life from nonlife, without which evolution cannot even begin.

In this regard, science agrees with the Bible more than with materialistic evolution. Almost everyone knows Genesis says that God created the heavens and the earth. And many believers know that Jesus Christ was also involved in the creation. Jesus “is the image of the invisible God… by him all things were created, in the heavens and on the earth, things visible and things invisible… all things have been created through him, and for him” (Col. 1:15-16).

John 1:3-4, speaking of the Word [Jesus: see vs. 14], says, “All things were made through him. Without him was not anything made that has been made. In him was life.” Life in Jesus! Some people theorize that life came to this planet from elsewhere. They are right! The living Jesus made this planet and brought life to it. That agrees with today’s science that life comes from life.

Scripture says, “For the invisible things of him [God] since the creation of the world are clearly seen, being perceived through the things that are made, even his everlasting power and divinity; that they may be without excuse” (Rom. 1:20). All the evidence in the world points to a Creator – including the proof from Louis Pasteur that life comes from life. Romans therefore says that those who disbelieve are without excuse.