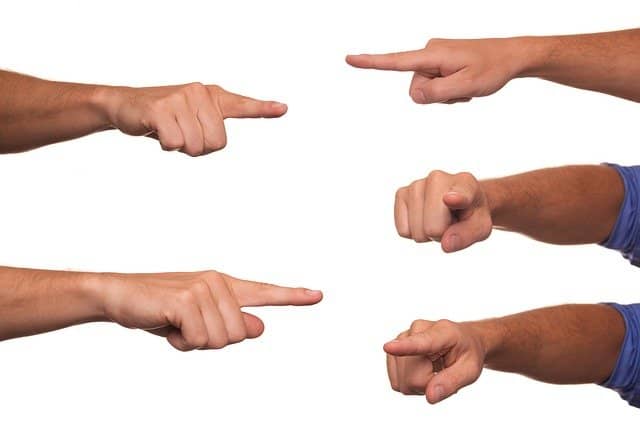 Did Jesus tell us not to judge? Yes, He did. It’s in the Sermon on the Mount. But on another occasion, He said, “Judge righteous judgment.” So which is it – judge or not judge?

“Don’t judge,” Jesus said (in the opening verses of Matt. 7). Jesus said it. That settles it – or does it? What kind of judging was Jesus condemning? The context is clear. It’s about hypocritical judging. I judge the fellow with a speck in his eye when I have a beam in my own eye! Perhaps most judging in the world falls under this category. Aren’t we all guilty of it?

Jesus asks, “Why do you see the speck that is in your brother’s eye, but don’t consider the beam that is in your own eye?” Exaggeration – to make a point. Aren’t we all prone to focus on our own good points and on the other person’s bad points? We should do the opposite: focus on their good and our bad. “Or how will you tell your brother, ‘Let me remove the speck from your eye,’ and behold, the beam is in your own eye? You hypocrite!” That is the issue here: hypocritical judging.

Psalm 44:21 says, “Won’t God search this out? For he knows the secrets of the heart.” God knows the heart. We do not. That tells me that we are getting into trouble if we judge peoples’ motives. “Why did she do that?” Only God knows. We ourselves are sometimes not even honest regarding our own motives. So why should we attempt to judge the motives of others?

Another time Jesus said, “Don’t judge according to appearance” (John 7:24). I might see someone in a bar and judge they are getting drunk, when actually the person went into the bar to give an urgent message to a neighbor. Many, many times, things are not really what they seem to be. Another way to express this is that we need to withhold judgment until we have all the facts. Proverbs plainly tells us, “He who answers before he hears, that is folly and shame to him… He who pleads his cause first seems right; until another comes and questions him” (Prov. 18:13, 17). How true this is in marriage problems. You hear only your friend’s side of the story and judge their spouse without hearing their side.

Returning to the Sermon on the Mount, notice Matt. 7:5: “You hypocrite! First remove the beam out of your own eye, and then you can see clearly to remove the speck out of your brother’s eye.” Did you ever have a speck of dust in your eye? It causes tears. It hurts. You want it out. Now! Jesus did not say to ignore the speck in the other person’s eye. Rather, He explained how to help people in need: clean up our own act first so that we can be a blessing in helping others.

Further in the sermon, without using the term “judge,” Jesus mentions more than one situation that requires judging. The very next verse says, “Don’t give that which is holy to the dogs, neither throw your pearls before the pigs, lest perhaps they trample them under their feet, and turn and tear you to pieces.” Judge that someone is a dog or a pig? That is so radical, we usually just ignore it. Some people get delight out of ridiculing Jesus and the Bible. Don’t give them more bait to feed their disrespect.

A few verses later Jesus warns, “Beware of false prophets, who come to you in sheep’s clothing, but inwardly are ravening wolves. By their fruits you will know them” (Matt 7:15). A wolf is disguised as a sheep. Pick up the corner of the wool covering to see if there is a wolf under there. We are told to examine the fruits. That’s serious judging in order to protect ourselves from frauds. We do it with sales pitches. We need to do it also with spiritual pitches.

“Don’t judge according to appearance [quoted above] but judge righteous judgment” (John 7:24). Yes, absolutely, we must judge. Don’t just take everything at face value. Beware! “Even Satan masquerades as an angel of light” (2 Cor. 11:14). We need to judge with righteous judgment.

The inclusive and affirming church in Corinth was told to judge the man who was living with his father’s wife (1 Cor. 5). “I wrote to you in my letter to have no company with sexual sinners; yet not at all meaning with the sexual sinners of this world… Don’t you judge those who are within [the church]? But those who are outside, God judges… Put away the wicked man from among yourselves.”  Paul urges the church to make a judgment inside the church and withdraw fellowship from this sinner in their midst. That’s neither easy nor fun, but it’s God’s directions to His people.

In the next chapter (6:1-7), Paul scolds them because brothers were taking each other to civil courts rather than having Christian brethren decide their cases. “Are you unworthy to judge the smallest matters? Don’t you know that we will judge angels? How much more, things that pertain to this life?” (1 Cor. 6:2-3).

To Judge or Not to Judge? Both! It all depends on the situation and the way we do it. There are certainly many wrong ways to judge, and that is probably what we mostly do. But we need to learn to judge – righteously. Otherwise, we will not only be led astray ourselves, but we will be unable to help others in spiritual need.