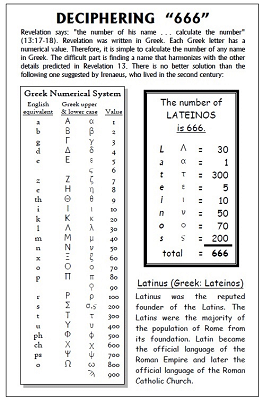 To obey God’s command to “count the number,” what else can we rightly do other than take the value of each letter in a name and add it up? The Greeks did not have Arabic numerals (1,2,3). Rather, every letter in the Greek alphabet had its numerical value.

As early as the second century, Irenaeus (130 to 200 A.D.) was searching seriously for Greek names with the numerical value of 666. Have in mind that Irenaeus heard the preaching of Polycarp, who in turn was taught by the apostle John. John wrote Revelation in Greek, so the appropriate thing is to calculate 666 in Greek.

Although Irenaeus knew that many Greek names had the value of 666, he did not consider it useless to search for the right one. On the contrary, he stressed the need to learn the name in order to not be deceived by the beast. He also realized that the name must harmonize with the rest of the prophecy. For example, he said it could not be fulfilled until the Roman Empire was broken into ten parts (see Rev. 13:1; 17:12).

Amazingly, Irenaeus suggested “Lateinos” as a possible solution. He said: “the Latins are they who at present bear rule,” being the fourth kingdom of Daniel 7. The letters of the Greek name “Lateinos” have these values: L=30; a=1; t=300; e=5; i=10; n=50; o=70; s=200. Total=666. The Latins were the majority in ancient Rome. Their language, Latin, became the official language of the Roman Empire and later of the Roman church. Irenaeus was right on track, centuries before the beast appeared.

NOTE: To continue study of 666 in-depth from the Bible and history, click here for Insight #307.