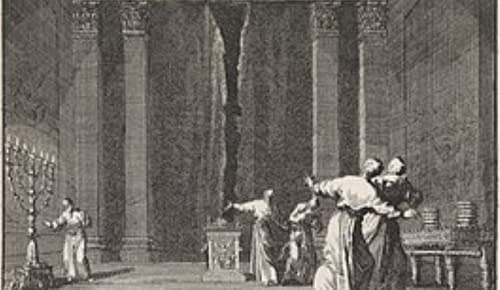 A Samaritan woman told Jesus, “Our fathers worshipped in this mountain (Mt. Gerizim); and you (Jews) say, that in Jerusalem is the place where men ought to worship” (John 4:20). Jesus replied: “You do not know what you worship… for salvation is of the Jews.” Jesus was physically a Jew. The apostles were Jews. Until then, God had dealt with the Jews as with no other nation. Until then, Jerusalem was the right place to worship; it was the holy city.

But Jesus added, “The hour comes, when you shall neither in this mountain, nor yet at Jerusalem, worship the Father… the hour comes, and now is, when the true worshippers shall worship the Father in spirit and in truth” (John 4:21,23). Jerusalem would soon cease to be the holy city. Temple worship in Jerusalem would no longer be holy. Before long, Jesus would become the perfect sacrifice for sins and God would rip in two the sacred temple veil.

After the Gospels, Jerusalem in Judea is never called holy. Revelation 3:12; 21:2,10 and 22:19 identify “the holy city,” “the city of my God,” as the “new Jerusalem” which “comes down out of heaven.” Revelation 11:1,2, is a debated text. But note that verse 8 says that the city where Jesus was crucified  “spiritually is called Sodom and Egypt.” Jerusalem is equated with wicked Sodom! Thus Galatians 4:25,26 says that the “Jerusalem which now is… is in bondage with her children. But Jerusalem which is above is free, which is the mother of us all.” And Hebrews 12:22 tells of “the city of the living God, the heavenly Jerusalem.”

Tags:Jerusalem and the Temple
previousInsight #69 — Man of Sin Part 2: The History (in-depth study, 2 of 3)
nextInsight #71 — Did Jesus Use the Wrong Examples?