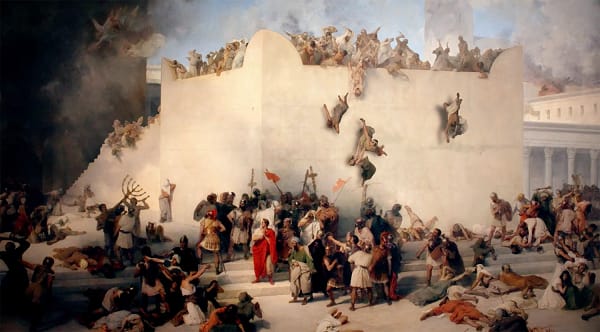 Tertullian (A.D. 145-220), born half a century after Apostle John’s death, believed that Matthew 24, Mark 13, and Luke 21 predicted BOTH the destruction of Jerusalem and of the end of the world.

He says of Jesus: “Being questioned by His disciples when those things were to come to pass which He had just been uttering about the destruction of the temple, He discourses to them FIRST of the order of Jewish events until the overthrow of Jerusalem, and THEN of such as concerned all nations up to the very end of the world.” Tertullian then quotes and discusses portions of Luke 21:24-36 (“On the Resurrection of the Flesh,” chapter 22).

Eusebius (A.D. 260-340) is well known for his “Church History.” In bk. 3, chap. 5-8, he covers Jerusalem’s destruction. Eusebius believed that “great tribulation” [Matt. 24:21] became history in the first century. After telling of Vespasian turning the armies over to Titus, he says: “the temple which was now awaiting its total and final destruction by fire—all these things any one that wishes may find accurately described in the history written by Josephus.”

After quoting Josephus, he continues: “… the true prediction of our Savior in which he foretold these very events. His words are as follows: ‘Woe unto them that are with child, and to them that give suck in those days… For there shall be great tribulation, such as was not since the beginning of the world to this time, no, nor ever shall be.’ The historian [Josephus], reckoning the whole number of the slain, says that 1,100,000 persons perished…

“These things took place in this manner in the second year of the reign of Vespasian… If any one compares the words of our Savior with the other accounts of the historian concerning the whole war, how can one fail to wonder, and to admit that the foreknowledge and the prophecy of our Savior were truly divine.”