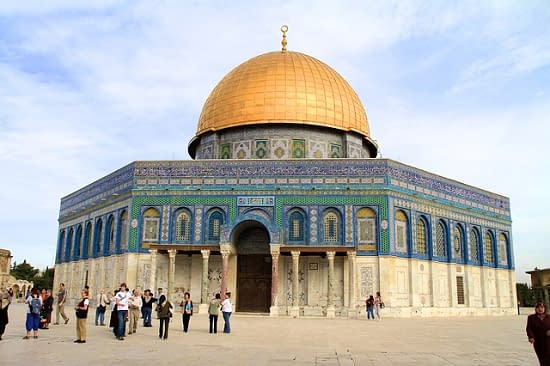 On Oct. 14 2003, Israeli police removed a leader of the Christian Zionist movement from Jerusalem’s Temple Mount. Why? He had been silently praying there. Since Ariel Sharon’s visit to the Temple Mount in September 2000, the Temple Mount had been off limits for non-Muslims. This May it was opened again, but with restrictions: Visiting hours were limited to two hours each day. In addition, Islamic rules do not permit worship or prayers on the Mount except to Allah. Muslim officials even trail visitors to make sure they do not pray even silently there. Meanwhile, the minarets on the Mount daily sound the call for prayers to Allah.

What is going on? Did not Israel conquer all Jerusalem in the 1967 six-day war? Surely. However, in the explosive situation, the Israeli government ceded administration of the Temple Mount to the Muslims. After all, their holy places have existed there since the seventh century. The Muslims now have four mosques on the Temple Mount. In recent times, they have constructed a huge mosque underground at the southeastern corner of the Mount large enough to hold 10,000 worshippers.

Nowadays the Israeli police continually limit Jewish access to the Mount so that Palestinians are not provoked into violence such as hurling stones from on top of the Mount down upon Israelis praying at the Wailing Wall on the outside edge of the Mount. Two weeks ago the situation became even more restrictive. Now only three Jews at a time will be permitted to enter the Temple Mount. Imagine! This is in contrast to allowing over 150,000 Muslims to enter the Temple Mount for Friday Ramadan prayers!

I do not know about you, but it sounds to me like Jerusalem is still very much trodden down by the Gentiles, as Jesus said it would be until the times of the Gentiles are fulfilled (Luke 21:24).

Tags:IslamJerusalem and the Temple
previousInsight #118 — The Most Unpopular Prophecy
nextInsight #120 — Prophecy Satisfies and Blesses