Insight #124 — Prophecy Fills in the Gaps 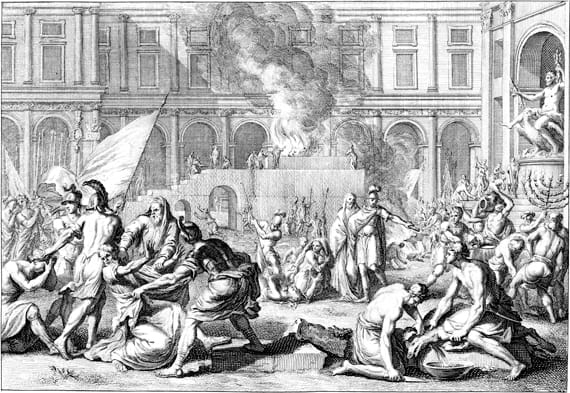 Indeed He does! Prophecy fills the gaps. It is especially Daniel who prophesies many details of the period between the two testaments. Of special interest are the prophecies about Judas Maccabeus, who liberated Jerusalem and cleansed the temple (Daniel 8 and 11). He is not named any place in the Bible. Secular history must be studied to learn the fulfillment.

It should be noted that to study “the Bible alone” is often insufficient when studying prophecy. Many prophecies do, of course, have their fulfillment recorded in Scripture. However, we often must study with the Bible in one hand and a secular history book in the other. Only thus can we learn the rich detail of fulfillment.

The Bible nowhere records the history of the destruction of Jerusalem and its temple in 70 A.D. However, this outstanding event is foretold in prophecies both by Daniel (chapter 9) and the Lord (Matthew 24; Luke 21). A study of these two prophecies and their historical fulfillment (especially using Josephus) is very important in understanding God’s dealing with the Jews.

As Daniel fills the gap between the two testaments, so Revelation fills the gap from the end of the Bible up to today. Rome plays an important part in these prophecies. Again, secular history sources are a must. Through studying these prophecies we gain insight into how God views many of the world’s events since the death of the last apostle.

NOTE:  Filling in the gaps is just one of many reasons to study Bible prophecy. For an in-depth view of many other benefits, consider Insight #3: Why Study Prophecy.

Tags:Prophecy for Us
previousInsight #123 – What Restrained the Man of Sin?
nextInsight #125 — Introducing the Issues