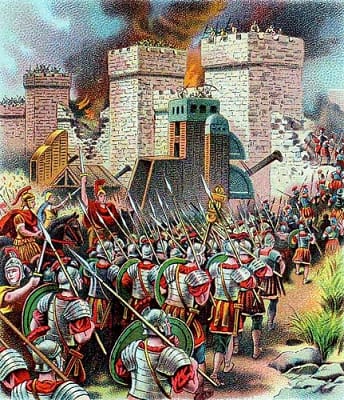 Were the Roman armies or were the Jewish Zealots the infamous abomination of desolation foretold by Daniel and Jesus? (For background information to this question, see Insight #152.)

In favor of it being the Roman armies are at least the following:
a) a comparison of the parallel texts (Matt. 24:15 & Luke 21:20);
b) the presence of the Roman standards was an abomination because of their idolatrous ensigns (see below);
c) the city of Jerusalem was a holy place (Matt. 27:53);
d) the Romans were the ones who desolated Jerusalem.

In favor of it being the Jewish Zealots are at least the following:
a) the Jewish Zealots foolishly installed Phannias as High Priest;
b) the Zealots brought in the Idumeans who murdered the legitimate High Priest Ananus, many other priests, and others;
c) the Zealots occupied the temple, making it a stronghold and filling it with blood and drunkenness;
d) it was the abominations of the Jews that was the underlying cause of the desolation of Jerusalem.

Both views have validity, but which one is right? Here are some of the points you may find helpful in reaching a conclusion:

1) Felix, the Roman governor who sought a bribe from the Apostle Paul, hired men to assassinate the High Priest Jonathan in about the year 55 (Josephus, Antiquities 20.8.5). If the murder of a High Priest was to be a sign to flee Jerusalem, people should have fled in 55 rather than in 68 when Ananus was killed.

2) After burning the temple, the Roman soldiers put their ensigns against the eastern gate of the temple and sacrificed to them (Josephus, Wars 6.6.1). This is clear proof that their ensigns were idolatrous, and thus an abomination (Deut. 27:15). The Jews not only rejected such sacrifices, they abhorred the very presence of the ensigns. When Vitellius, Governor of Syria, in A.D. 37 was simply passing through Judea with two legions, the Jews pled with him to take another route, because it was unlawful for them to look upon the images in their ensigns (Ant. 18.5.3).

3) A careful language study shows that “holy place” in Matt. 24:15 does not necessarily refer to the temple. However, a simple approach will suffice. Daniel’s prophecy (Dan. 9:24-27) is about “your holy city… Jerusalem.” Jerusalem was a “holy place.”

4) The Roman soldiers first surrounded Jerusalem in A.D. 66 under Cestius Gallus. However, they soon retreated “without any reason in the world” (Wars 2.19.7). After that, “many of the most eminent of the Jews swam away from the city, as from a ship when it is going to sink” (Wars 2.20.1). Just what Jesus said to do.

5) Matt. 24:15 says the abomination of desolation was “spoken of by Daniel,” and adds, “whoever reads let him understand.” So what can we understand from Dan. 9? Verse 26 has the clue: “the people of the prince that shall come shall destroy the city… unto the end of the war desolations.” The desolation is caused by a war by some people to come, not by “your people” (verse 24). It seems we must accept the Roman armies with their idolatrous standards as the abomination of desolation.