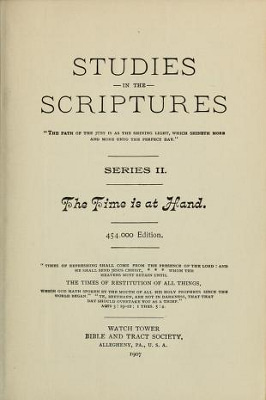 The Watchtower Society over a century ago predicted that Jesus would return in 1914: right? Wrong. Don’t be upset, that’s what I used to think, too. Yes, they now say Jesus came in 1914 — invisibly — but they did not predict it. What did the Watchtower predict for 1914?

When I originally wrote this Insight (in 2007), I owned one of the earliest publications of the Watchtower Bible and Tract Society, written decades before the organization began using the name “Jehovah’s Witnesses.” The Time Is at Hand was originally written in 1888, and was reprinted many times. My copy was dated 1910. The author is none other than Charles Taze Russell, the founder and first president of the Watchtower. I have since given my copy away, but now (in 2021), photocopies of the old editions are available for viewing online.

The Time Is at Hand is loaded with predictions about 1914, but not what you might think. Russell says that Jesus had already come the second time — invisibly: “Not that the Lord will come soon, but rather that he has come and is now present” (pg. 149). “The date of our Lord’s second advent, and the dawn of the Times of Restitution, we have already shown to be A.D. 1874” (pg. 211).

For Russell, the period between 1874 and 1914 was a period of… well, let him explain: “We are now in this period called the ‘harvest,’ in which the Gospel age and the Millennial age lap — the one closing and the other opening… The harvest work will occupy forty years for its full accomplishment, ending with A.D. 1914” (pg. 150).

What else in or by 1914? “In this chapter we present the Bible evidence proving that the full end of the times of the Gentiles, i.e., the full end of their lease of dominion, will be reached in A.D. 1914; and that that date will be the farthest limit of the rule of imperfect men” (pg. 76-77). “True, it is expecting great things to claim, as we do, that within the coming twenty-six years all present governments will be overthrown and dissolved” (pg. 98-9). “We consider it an established truth that the final end of the kingdoms of this world, and the full establishment of the Kingdom of God, will be accomplished at the end of A.D. 1914” (pg. 99).

In short, Russell taught that Jesus had already come in 1874. He predicted that 1914 would see the end of terrible times and the beginning of the triumph of God’s millennial kingdom. He said 1914 would “be the farthest limit of the rule of imperfect men… all present governments will be overthrown and dissolved.” To simply uncover and quote these predictions is enough to convict Russell of being a false prophet.

The apostle John said: “Believe not every spirit, but try the spirits whether they are of God: because many false prophets are gone out into the world” (1 John 4:1). Centuries before John, Moses told us how to identify false prophets: “When a prophet speaks in the name of the Lord, if the thing follow not, nor come to pass, that is the thing which the Lord has not spoken, but the prophet has spoken it presumptuously” (Deut. 18:22).

Russell claimed Jesus returned invisibly in 1874. He predicted 1914 would be the end of terrible times with the full end of human governments. Today’s Watchtower, rather than denounce Russell as a false prophet, retains his failed 1914 date and whitewashes his false predictions. On their website at the time of this writing, they said: “Not all that was expected to happen in 1914 did happen” (the webpage is no longer available). “Not all that was expected”? Let them name one prediction of Russell’s that was visibly fulfilled in 1914. The Watchtower is built on a foundation of false prophecies by a false prophet. Jesus said, “Beware of false prophets.” John said, “Believe not every spirit, but try the spirits.”