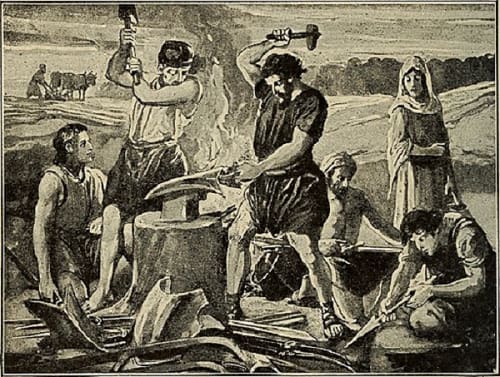 In the heart of New York City, in the Peace Park facing the U. N., stands a monument with huge letters, carved in stone: “They shall beat their swords into plowshares, and their spears into pruning hooks: nation shall not lift up sword against nation, neither shall they learn war any more — Isaiah.” Yes, Isaiah 2:4.

Isaiah’s prophecy has nothing to do with the U.N.’s “peace keepers.” It has everything to do with the Prince of Peace. The preceding verse says: “For out of Zion shall go forth the law, and the word of the Lord from Jerusalem.” Isaiah was predicting a new law that would originate on Mt. Zion in Jerusalem.

Jesus referred to this and similar predictions when He explained, “All things must be fulfilled… and remission of sins should be preached in his name among all nations, beginning at Jerusalem” (Luke 24:44-47). That is why the first years of the church were exclusively in Jerusalem. It was God’s plan.

The early Christians followed the example and teaching of King Jesus: “My kingdom is not of this world: if my kingdom were of this world, then would my servants fight, that I should not be delivered to the Jews: but now is my kingdom not from hence” (John 18:36). This was not a teaching for a future Millennium. Rather, it was part of the Jerusalem gospel. Most of the early Christians believed it and lived it. Today, we are so accustomed to post-Constantine “Christendom” that we forget what it was like before Christianity became legal and “respectable” in the fourth century.

Listen to Justin Martyr in the second century: “We who were filled with war, and mutual slaughter, and every wickedness, have each through the whole earth changed our warlike weapons, — our swords into ploughshares, and our spears into implements of tillage” (Dialogue with Trypho, Chap. 110).

In Justin’s “Apology” to Emperor Antonio Pius (reigned A.D. 138-161), he explained: “That it [Isa. 2:3-4] did so come to pass, we can convince you. For from Jerusalem there went out into the world… the word of God; and we who formerly used to murder one another do not only now refrain from making war upon our enemies, but also, that we may not lie nor deceive our examiners, willingly die confessing Christ” (First Apology, Chap. 39).

Tertullian (A.D. 150-220) argues: “We must first inquire whether warfare is proper at all for Christians… Shall it be held lawful to make an occupation of the sword, when the Lord proclaims that he who uses the sword shall perish by the sword?” (The Chaplet, Chap. 11).

Isaiah predicted that when the word of the Lord went forth from Jerusalem, those who received that word would learn war no more. For three centuries after Jesus was killed, most of His disciples would rather be killed than to kill. Their task was not to defend themselves by killing their enemies. Rather it was to defend the gospel, converting their enemies. Onward Christian soldiers — our only sword the Word of God!