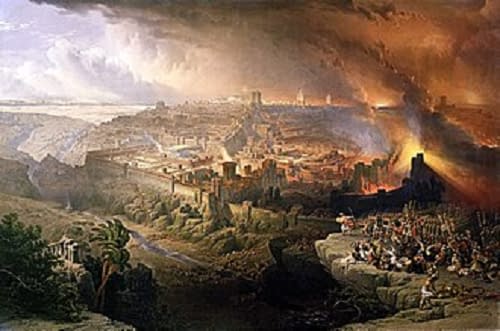 The Romans had respect for the holy sites of the nations they captured. Titus did not want to destroy the temple in Jerusalem. As the Romans captured more and more of the city, the hard-liners took to the temple area itself as a last fortress from which to fight. Titus pled with them: “if you will but change the place whereon you will fight, no Roman shall either come near your sanctuary, or offer any affront to it; nay, I will endeavour to preserve you your holy house, whether you will or not” (Wars, book 6, chapter 2, paragraph 4).

The hard-liner Jews (Josephus calls them the “seditious”) rejected Titus’ offer. Thus were these hard-hearted, stubborn, unbelieving Jews the very instrument of the fulfillment of the prophecies of Daniel and Jesus!

Court by court the Romans took the temple area until all that was left was the holy house itself, with the cloisters surrounding it. Some Roman soldiers set fire to these outer rooms. Titus attempted to intervene. However, his soldiers were so infuriated by the stubbornness of the Jews that they could not be stopped. The temple could not be saved. The almighty Creator God of the universe had decreed its destruction!

As the end neared, Titus took opportunity to speak to those who remained of the Jews to see if they would accept surrender. (They did not.) As he opened his speech, he made a remarkable statement. Remarkable because it reminds us of Daniel’s prayer and Gabriel’s prophecy. Titus said: “I hope you, sirs, are now satiated with the miseries of your country, who have… like madmen, after a violent and inconsiderate manner, made such attempts, as to have brought your people, your city, and your holy house to destruction” (book 6, chapter 6, paragraph 2).

[This selection is taken from the full-length Insight #27: “Not One Stone Upon Another,” discussing in depth Daniel and Jesus’ predictions which were fulfilled in A.D. 70.]