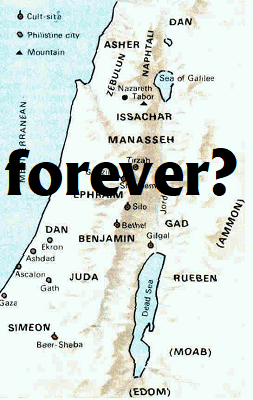 As the Israelis and Palestinians battle over land that both claim as their own, American futurists (dispensationalists) side with the Israelis, claiming the Bible is on their side. Indeed, did not God promise Abraham: “All the land which you see, to you will I give it, and to your seed forever” (Gen. 13:15). Forever. “It is because of such verses,” says futurism, “that Israel is again in their land today and must inhabit it during the coming millennium. Prophetic promises must be fulfilled.”

But wait a minute. They tell us to expect the literal fulfillment of God’s “forever” promise, right? Now, what if I would tell my bride, “I’m yours forever.” Then I would live with her for 15 years. After that I go to live with another woman for 20 years. Finally I come back to my original bride and tell her, “Since I promised to live with you forever, here I am again.” Does that make sense? Futurism says Israel must live in the Promised Land now, and then also during the millennium, in order to fulfill the “forever” promise. But what about nearly 1,900 years, from A.D. 70 to 1948, when there was no Jewish nation in Palestine? What happened to “forever” during nearly two millennia?

Did God fail to keep His promise? We need to read the fine print. The promise had conditions! God never said that “forever” was unconditional. God never implied that Israel could behave as they pleased and still continue to claim the “forever” promise.

In fact, before Moses died, he solemnly warned the children of Israel: “When you shall beget children… and you shall have remained long in the land… and shall do evil in the sight of the Lord your God, to provoke him to anger… you shall soon utterly perish from off the land… and the Lord shall scatter you among the nations” (Deut. 4:25-27).

When Solomon built that magnificent temple, God told him: “If you shall at all turn from following me, you or your children… then will I cut off Israel out of the land which I have given them” (1 Kings 9:6-7).

Many such warnings could be cited. History shows that Israel did not heed the warnings and that God kept His word. In 722 B.C., God used the Assyrians to expel the Northern Kingdom of Israel from the Land of Promise, never to return as a political entity. Less than a century and a half later, God used the Babylonians to do the same to the Southern Kingdom of Judah. In the case of Judah, God told the people through Jeremiah that the captivity would be for 70 years. God had plans to bring the Messiah into the world and He needed Judah in their land to accomplish that.

But then came the ultimate sin: the leaders of Israel, and Israel as a nation, rejected their own Messiah, the Son of God. Peter charged them on the day of Pentecost: “Him… you have taken, and by wicked hands have crucified and slain” (Acts 2:23). The end result was the destruction of Jerusalem in A.D. 70, the removal of the Jews from Palestine, and the scattering of the Jews throughout the entire world — just as God had warned. They did not return in significant numbers for nearly 1,900 years.

“Forever” had conditions; and no matter what the Jews have done since 1948, they have already failed to have possession of Palestine, Canaan, the Promised Land “forever.” No supposed possession of Palestine for “the millennium” can fulfill the “forever” promise. The historical fact remains that the Jews have not — have not — dwelt in Palestine “forever.” Why did they not? Jehovah clearly attached conditions to the prophetic promise, and the children of Israel failed to keep those conditions.