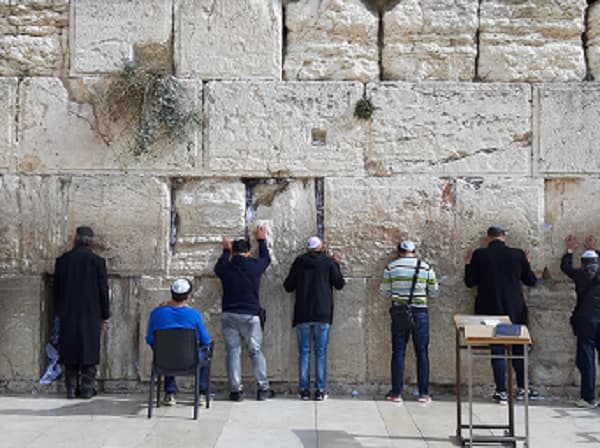 “Rebuild the temple,” ordered the Roman Emperor. Jews flocked to Jerusalem, opened their purses, and rolled up their sleeves. They would have their precious temple again. It was A.D. 361.

Had anyone else tried to rebuild the temple since the Romans leveled the city in A.D. 70? Yes. In A.D. 132, Bar-Cochba led an uprising, reconquering Jerusalem, intending to rebuild the temple. However, Emperor Hadrian’s top commander crushed the revolt. Bar-Cochba was slain and it was all over. A new idolatrous city, Aelia Capitolina was built on Jerusalem’s ruins. Jews were forbidden to enter Jerusalem, upon pain of death. They could only look from afar on each anniversary of Bar-Cochba’s defeat.

After Constantine, Rome was ruled by “Christian” Emperors who had little sympathy for the Jews. In fact, Christians considered the desolation of Jerusalem a divine sign that God was no longer with the Jews. Listen to Tertullian (A.D. 150-220): “Christ is already come, as foretold through the prophets, and has suffered, and is already received back in the heavens… after His advent, we read, according to Daniel, that the city itself had to be exterminated; and we recognize that so it has befallen… Therefore, since the Jews still contend that the Christ is not yet come, whom we have in so many ways approved to be come, let the Jews recognize their own fate” (“An Answer to the Jews,” Chap. 13).

And hear what Origen (A.D. 185-253) declared: “The whole Jewish nation was overthrown within one single generation… forty and two years, I think, after the date of the crucifixion of Jesus, did the destruction of Jerusalem take place… One fact, then, which proves that Jesus was something divine and sacred, is this, that Jews should have suffered on His account now for a lengthened time calamities of such severity. And we say with confidence that they will never be restored to their former condition… It accordingly behooved that city where Jesus underwent these sufferings to perish utterly, and the Jewish nation to be overthrown” (“Origen Against Celsus,” Book 4, Chap. 22).

However, in A.D. 361, Rome acquired a new Emperor, Julian, called the Apostate. As an avowed enemy of Christianity, he had allies in the Jews. Rebuilding the temple in Jerusalem would be a great blow to the beliefs of the Galileans (as he disdainfully called the Christians).

Soon after taking office, Julian gave the order to rebuild the temple in Jerusalem. He provided great sums of money and assigned one of his ministers to take charge. Jews from throughout the Empire sped to Jerusalem. The first job was to clear the debris. The Jews were enthralled. But what’s that? Fire! They fled. Horrible balls of fire broke out near the foundations. The fire died down. Back to work. Fire again, and again, and again. They could not continue. The work was abandoned. Shortly, Julian was slain in battle, just 18 months after taking office. A “Christian” Emperor took his place. It was all over. The fire? Some say it was a miracle, some say it was natural. In any case, it is a fact of history, attested to by both Christian and pagan contemporary sources. (See Edward Gibbon’s “Decline and Fall of the Roman Empire,” Chap. 23, Part 3).

Neither the rebel Bar-Cochba nor the Emperor Julian could frustrate Jesus’ solemn prediction: “Jerusalem shall be trodden down of the Gentiles… ” (Luke 21:24). The Christians were vindicated. The word of Christ held true. There is a doubtful tradition that as Julian was dying he exclaimed, “Galilean, thou hast conquered!” Even if Julian did not confess it, the statement is nonetheless true. Jesus conquered: “My words shall not pass away.”

Tags:Jerusalem and the Temple
previousInsight #173 — Does God Change?
nextInsight #175 — Who Controls the Temple Mount?