Insight #175 — Who Controls the Temple Mount? 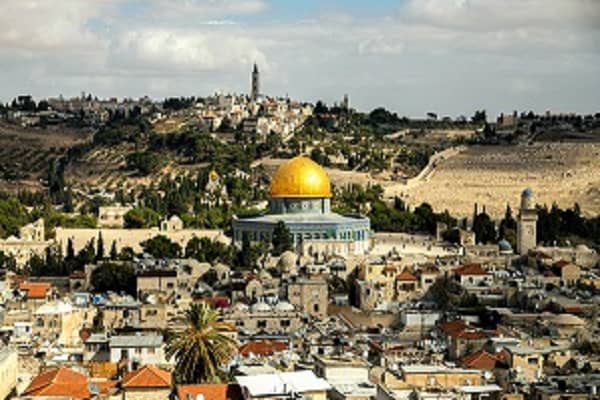 Who controls the Temple Mount? Many say that’s easy to answer: “Since the six-day war in June, 1967, Old Jerusalem, with it’s Temple Mount, has obviously been under the control of Israel.” Not really. The more I learn, the more I am convinced that the Jews are far from controlling Jerusalem. The Temple Mount, in particular, is solidly controlled by Islam.

There is obvious evidence on Jerusalem’s skyline: the golden Dome of the Rock. This third most holy shrine of Islam, built just 55 years after Muhammad’s death, dominates the site where the Second Temple once stood. Today there is no visible evidence of Judaism on the Temple Mount.

In 1967, as the Israelis rapidly took the Old City, an Israeli flag was hoisted atop the Dome of the Rock. Israeli generals, soldiers, and citizens shouted, cheered, embraced, kissed, wept, prayed, sang, and danced as the reality sank in that the Old City, the Temple Mount, and the Western Wall were all in Jewish hands.

But wait! Orders had been given not to damage any holy site of any religion. At the moment of takeover, the army’s chief rabbi urged General Narkiss to blow up the Dome. The General flatly rejected the idea. When Defense Minister Moshe Dayan arrived, he ordered the Israeli flag removed from the Dome. A week later, Dayan met with Muslim leaders to turn over the “administrative affairs” of the Mount to the Islamic Waqf Authority, which had administered it for centuries. Israel would control “security.”

Dayan announced that Jews could visit the Temple Mount, but not worship there. Before the end of June, the Religious Affairs Minister told the Knesset: “The Temple Mount belongs to us but isn’t in our hands. It’s in the hands of millions of Muslims.” Then the Knesset passed a Protection of Holy Places Law, which fully agreed with Israel’s Proclamation of Independence in 1948: Israel “will safeguard the Holy Places of all religions.”

Since that time, successive Israeli governments have maintained a policy of non-interference with Muslim control of the Mount. Just late last year, two members of the Knesset requested permission to pray on the Temple Mount. The Israeli Public Security Minister replied: “Jews may pray on their holiest site – but only in their heart; no lip-moving allowed.” In contrast, just two weeks earlier, the Israeli government allowed Hamas to broadcast anti-Jewish themes directly from the Mount. In reaction to these two cases, a leading Jewish organization declared “the government of Ehud Olmert has ceased to be a Jewish government altogether, having not the slightest connection with the Jewish people.”

Is there any place else on earth where anyone is prohibited from silently moving their lips in prayer! Why does Israel have such a severe policy against its own people? To avoid bloodshed by enraged Muslims. In short, via the six-day war, the Israelis conquered the Temple Mount and they controlled it for one week. Then they relinquished control to the Muslims and promised to defend the Mount as a Muslim Holy Site.