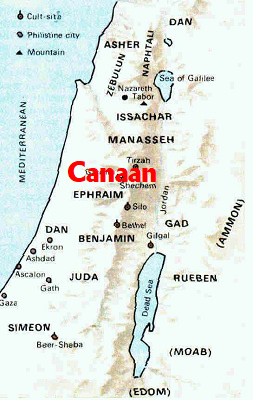 I suppose the major evil influence of the “curse of Ham” myth was the justification it offered for white men to enslave black Africans. But this myth is not dead. When I decided to write about this prophetic curse, it never crossed my mind that today’s politics might be involved. What a shock it was when the fifth hit under “curse of Ham” said: “The Curse of Ham: Why Barack Hussein Obama Will Never Be President.” Let me emphasize that I am making no political statement here in any direction. Rather, I am making a moral and biblical statement. This self-proclaimed “conservative Christian” website says, “All people of dark skin carry the curse of Ham.” There you have it in 2008 — supposed “Christians” continue to twist the Bible to uphold their racism.

Margaret and I were introduced to another angle of the “curse of Ham” when we lived in North Carolina. Many people prefer the old King James Version of the Bible, and that’s their privilege. However, we learned that many churches today declare the original King James Version as the only legitimate and divine translation, with all other translations being works of Satan. At a King-James-Only conference we heard a discussion of Bible manuscripts. Those of you acquainted with the subject recognize the Alexandrian (Egypt) Manuscript as one of the most important manuscripts of the Bible. You don’t have to be an anthropologist to know that Egypt is the “land of Ham.” Just read Psalms 105:23-27. You can already see where the preacher was headed. Alexandria, Egypt, land of Ham, Ham cursed of God, the Alexandrian Manuscript is accursed of God as are all versions based upon it. Wow!

It is true that black-skinned people of Africa are most likely descendents of Ham; but Ham was never cursed; black skin or dark skin was never cursed. What does the Bible say? It’s all in the few verses of Gen. 9:20-27. In short: Noah got drunk, Ham acted shamefully, Noah cursed Canaan, one of Ham’s sons. Noah said, “Cursed be Canaan; a servant of servants shall he be unto his brethren,” and went on to say that Canaan would be a servant of Shem and Japheth.

Noah neither cursed nor blessed Ham and Ham’s other three sons. A fulfillment of Canaan’s descendents being slaves of Japheth’s descendents requires a study of anthropology and history. However, the subjugation of Canaanites by Semites is a well-known Bible fact. Gen. 10:15-19 lists the descendents of Canaan, including Jebusites, Amorites, and Hivites, along with Canaanites in general. The text describes the Canaanite territory as from Sidon to Gaza to Sodom. This territory is called the “land of Canaan” 64 times in the OT from Genesis to Ezekiel.

Nations descended from Canaan were cast out of the “Promised Land” by Israel (descendents of Shem). Most of those Canaanites were slaughtered in the process. However, some remained and became subservient to Israel at various times in their history. See Josh. 9:3, 7, 22-27; Jud. 1:27-35; and 1 Kings 9:20-21. In Josh. 9, speaking of certain Canaanites, Joshua says, “Now therefore you are cursed, and there shall none of you be freed from being bondmen, and hewers of wood and drawers of water.”

In short, Ham and three of his sons were neither blessed nor cursed by Noah; they were ignored. The curse fell only upon Canaan, and the Bible clearly tells us the fulfillment of the curse as far as Canaan’s relationship to Shem is concerned. The “curse of Ham” is a myth, a very perverted and dangerous myth.

Tags:Misc. Nations, Cities, People
previousInsight #175 — Who Controls the Temple Mount?
nextInsight #177 — Time, Times, and a Half