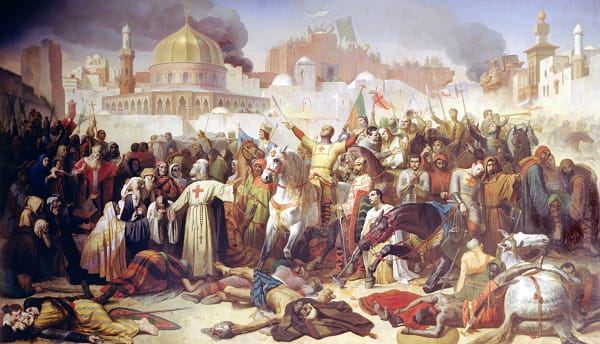 Daniel predicted a “little horn” who would persecute the saints of God for “a time and times and half a time.” How long is that? The common view is that “time” is one year, “times” is two, and half a time is 1/2 year. Three and a half years. Can this be right?

All these texts predict a satanic power prevailing over the saints of God. Since the length of time is identical in all seven, it is natural to believe that they all predict the same period, simply offering different views and details of an awful time in history.

The question arises: Why would Scripture put so much emphasis on such a short period of history? Is there any 3 1/2 year period in history that could be singled out as Satan’s most outstanding attack upon the saints of God? A much longer time seems more reasonable. Indeed, since the prophecies are highly figurative (a little horn, a woman in the wilderness, a ten-horned beast, etc.) there is a presumption that the time period is also figurative.

Those of you well acquainted with Daniel’s 70-weeks prophecy know that that prediction was not fulfilled in 70 literal weeks. You also know that God once gave a prophetic key to Ezekiel: “I have appointed you each day for a year” (Ezek. 4:6). If you apply this key, 70 weeks becomes 490 years. That results in a prediction that was marvelously fulfilled with Jesus’ first coming.

Returning to the seven predictions of 1,260 days, and applying the day-for-a-year key, the result is 1,260 years, a very significant length of time that is fully worthy of so much prophetic attention. When will or did this take place?

Most believers agree that the little horn in Dan. 7 and the beast in Rev. 13 are predictions relating to Rome. Early Christian writers, based on these prophecies, widely believed the little horn would make its appearance after the fall of the Roman Empire.

And what happened historically after the fall of Imperial Rome? The papacy in Rome filled the vacuum and ruled for more than 1,000 years over the bodies and souls of men. Who or what can fulfill the “little horn” prediction if not the Roman papacy, which ascended upon the ashes of Imperial Rome?

There are various opinions regarding the exact dates for the beginning and end of the 1,260 years. Many students of Scripture and history feel that A.D. 533 to A.D. 1793 (1,260 years) best fits the requirements of all seven texts. This seems to be the time frame of the papacy’s maximum power, i.e. from Emperor Justinian’s decree that the Pope is the Head of all the churches to the French Revolution’s blow to the Pope’s political power. Among other things, those years included the infamous Crusades and Inquisition. Although the papacy still exists today, any of you acquainted with the Middle Ages know that the Pope of Rome has no power today in comparison to the power he once had.