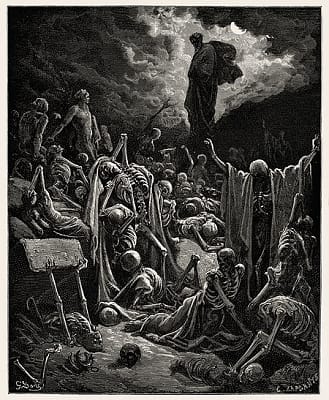 It was Holocaust Remembrance Day, Jan. 27, 2010, in Auschwitz, Poland. Benjamin Netanyahu, Prime Minister of Israel, made the amazing observation that modern Israel has fulfilled the dry bones prophecy of Ezek. 37: “We have returned to our homeland… from every corner of the earth… The Jewish people rose from ashes… Dry bones became covered with flesh, a spirit filled them, and they lived and stood on their own feet. As Ezekiel prophesied…” He then quoted Ezek. 37:11-12. Many prophecy watchers are thrilled. But do the watchers have reason to be thrilled? Is Netanyahu right in making this connection with Ezekiel?

Ezekiel wrote “among the captives by the river of Chebar… in the land of the Chaldeans” (1:1-3). A few verses before the dry-bones prediction, he wrote the words of God: “when the house of Israel dwelt in their own land… I poured my fury upon them… I scattered them among the heathen” (36:17-19). That’s the Babylonian captivity. However, in verse 24, God promised: “I will take you from among the heathen, and gather you out of all countries, and will bring you into your own land.”

In this Babylonian-captivity context, Ezekiel is taken by the Spirit to a valley full of dry bones (37:1). In very picturesque fashion, the dry bones become living men. In 37:11-12, God explains: “these bones are the whole house of Israel: behold, they say, Our bones are dried, and our hope is lost… Therefore prophesy… I will open your graves, and cause you to come up out of your graves, and bring you into the land of Israel.” Notice, the text is not “they will say,” future. It is “they say,” present tense. That is what the children of Israel were then saying in their Babylonian captivity. But God promised their return to Israel. And so it happened. The dry bones came to life when the Persians conquered Babylon and permitted — even encouraged — the Israelites to return to their own land. This prediction has nothing to do with modern Israel.

The context says even more. In Ezek. 37:14 God promised he would “put my spirit in you.” In 36:27, God had enlarged upon that: “I will put my spirit within you, and cause you to walk in my statutes, and you shall keep my judgments.” This prediction fits those returning from Babylon. It does not fit modern Israel. Putting aside its rejection of God’s Messiah, modern Israel rejects numerous statutes God gave them through Moses.

Ancient Israel returned from Babylon to rebuild the temple, which they did in spite of the opposition of the pagans dwelling in Samaria. Modern Israel, in contrast, having gained control of Old Jerusalem in 1967, immediately conceded administration of the Temple Mount to the Muslims, with Israel pledging to protect the Dome of the Rock as a “holy place.” In recent years, efforts by a fringe group to lay a temple cornerstone on the Temple Mount have repeatedly been repulsed by the Israeli government.

Not only is the modern secular Israeli government not interested in reestablishing the sacrifices mandated by Moses, neither are they interested in keeping other basic laws of the Torah. Israel today is billed as one of the most “progressive” countries in the world in protecting the “rights” of homosexuals. Annual Gay Pride parades take place, not only in Tel Aviv, but in Jerusalem itself. Abortion is legal, in many cases free, and widely practiced. On a different issue, under the modern law of return, Jews who immigrate to Israel are granted automatic Israeli citizenship — but not if they believe in Jesus!

No, the current secular state of Israel does not fulfill the prophecy of Ezekiel 36-37. This modern return is not a spiritual return — either to Moses or to Jesus. It is a physical return. The ancient return from the Babylonian captivity under Zerubbabel, Ezra, and Nehemiah was, as predicted, not only a physical but also a spiritual return. The dry bones prophecy was fulfilled hundreds of years before the Messiah came to earth the first time.