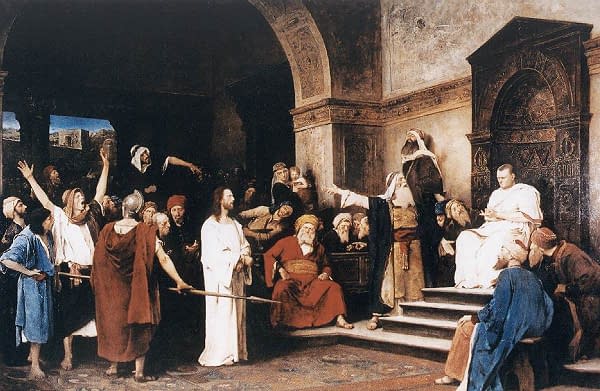 Did Jesus fail? Days after a tumultuous reception in Jerusalem, Jesus was betrayed by one of his disciples, charged with blasphemy, tried by the Roman governor, and executed under mob pressure. Jesus failed — or at least that’s how two of his down-in-the-mouth followers looked at it a few days after his crucifixion. Their view: “we trusted that it had been he which should have redeemed Israel” (Luke 24:21).

Did Jesus fail? He came to establish the kingdom predicted by the prophets, but Israel rejected Him. After several attempts on His life, He was arrested. When Pilate asked the Jews if they wanted their king to be crucified, they cried, “We have no king but Caesar” (John 19:15). The crucified Nazarene could not set up His kingdom — or at least that’s how today’s popular prophecy preachers look at it.

Today’s popular brand of prophecy (dispensationalism) teaches that Jesus offered to set up an earthly kingdom for Israel; but when the Jews rejected the offer, Jesus had to withdraw and postpone the offer and set in motion an alternative plan (the church), which would last until such time as He could fulfill God’s original kingdom plan.

Jesus did not fail! He corrected the two sad disciples (and others) that evening: “These are the words which I spoke unto you, while I was yet with you, that all things must be fulfilled, which were written in the law of Moses, and in the prophets, and in the psalms, concerning me… Thus it is written, and thus it behooved Christ to suffer, and to rise from the dead the third day: and that repentance and remission of sins should be preached in his name among all nations, beginning at Jerusalem” (24:44-47).

Early in Jesus’ ministry, he announced, “The time is fulfilled, and the kingdom of God is at hand” (Mark 1:15). What time? Daniel had predicted four empires: Babylon, Persia, Greece, and Rome. Then, “in the days of these kings shall the God of heaven set up a kingdom” (Dan. 2:44). In the days of the Roman kings. Popular prophecy preachers tell us that “these kings” refers to ten kingdoms of a Roman Empire to be revived in our times.

But wait a minute. Jesus said the time was fulfilled for the kingdom to be at hand. Later, He pin-pointed it further: “there be some of them that stand here, which shall not taste of death, till they have seen the kingdom of God come with power” (Mark 9:1). Thus, the kingdom had to arrive in the first century. What kind of kingdom would it be — physical or spiritual? Jesus set the record straight when He told Pilate: “My kingdom is not of this world: if my kingdom were of this world, then would my servants fight, that I should not be delivered to the Jews” (John 18:36).

If Jesus’ plans had been to set up an earthly kingdom like David’s, he would have had “mighty men” and armies like David. From Goliath onward, David was such a “man of war” that God did not allow him to build the temple (1 Chron. 28:3). Jesus did not have soldiers to kill men; he had disciples to be “fishers of men.” He did not wage physical war against anyone. He spent his ministry healing and teaching. Jesus’ ministry, from start to finish, was setting the stage for the establishment of a spiritual kingdom.

This kingdom arrived on time. Paul told the Colossian brethren that God “has translated us into the kingdom of his dear Son” (1:13). John told the saints: “I John, who also am your brother, and companion in tribulation, and in the kingdom…” (Rev. 1:9). The early Christians were in the kingdom. Jesus had not failed.

If Daniel 2 predicted a kingdom to be set up in the 21st century, then Jesus was wrong when He said, “The time is fulfilled, the kingdom of God is at hand”! But if Jesus was right, then the popular prophecy preachers are wrong.

I prefer to believe that Daniel and Jesus were right — that Daniel was predicting, and Jesus was preparing for, a spiritual kingdom that would arrive before the fall of the Roman Empire. I believe the promised kingdom did come, is here now, and that you can be part of it, if you are not already. Jesus did not fail!