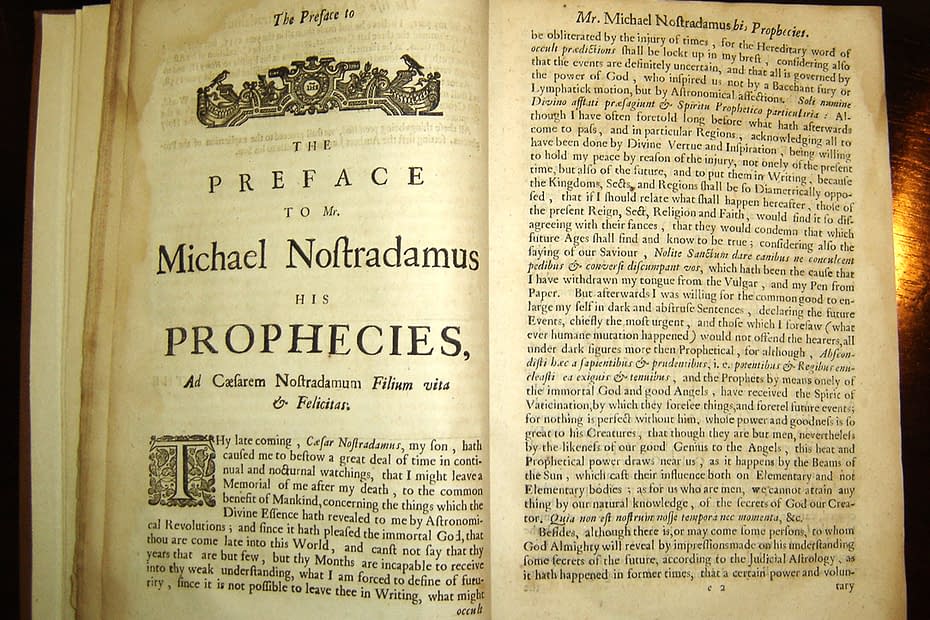 A few days ago (Dec., 2011), I took a moment to look over used books for sale at our local library. My eyes fell on “Nostradamus Predicts the End of the World.” Published in 1981, it had a sub-title of “Will the World Survive the 1990s?” I have often thought of finding out a little more about the predictions of the world’s most famous astrologer. For just 50 cents, I figured this was the time.

Decades ago in New York City, I was conversing with a well-educated woman, knowledgeable in both history and the writings of Nostradamus. I invited her to study one of Daniel’s many detailed prophecies. Because of her knowledge of history, she had no trouble telling me the fulfillment. She then readily admitted that there was nothing in all of Nostradamus’ writings to compare with the detail and clarity of Daniel’s prophecy.

Now, spurred by my 50-cents book, I have done a little research. Nostradamus, a psychic, drew up horoscopes for the wealthy and received many visions by gazing into a bowl of water. His best known work, “The Prophecies,” consists of almost 1,000 quatrains (four line poems). These were written in several languages, were filled with symbols and are largely vague. Here is an example:
“The young lion will overcome the older one,
In a field of combat in a single fight:
He will pierce his eyes in their golden cage;
Two wounds in one, then he dies a cruel death.”

We might find some meaning for this vague quatrain by reading its context. However, it has no context! All interpreters agree that the quatrains are all jumbled up. Nostradamus himself purposely mixed them all up so that all time sequences involved were totally obscured. Thus, it is up to each interpreter to invent his own order. No wonder there are so many interpretations.

My 50-cents book says: “Sometime before 1995, Russia and the United States will ally themselves against China, the Middle East, and Latin America in the most destructive and terrifying war the world has ever experienced… This theory was originally propounded in verse form by Michel de Nostredame, better known as Nostradamus.” This 1981 book goes into great detail inventing this mythical war, complete with maps of troop movements. The author arrived at this fairy tale via his own rearrangement of the quatrains, with interpretations that suited his fancy.

A major reason for differing interpretations of the Bible is that “students” take statements out of context. By mixing verses from here, there, and yonder, you can concoct most any fable. That is not Bible interpretation. It is Bible abuse. But when it comes to the quatrains, Nostradamus himself put everything out of context. For this reason alone, even if there were no other, it is senseless to make any comparison between the Bible and Nostradamus. There is a great gulf between the two. The Bible has a deeply meaningful message from Genesis to Revelation, with contextual clues all along the way. It takes us from the creation of heaven and earth to the creation of the new heaven and new earth.

The book of Revelation, as well as other parts of the Bible, does use symbolism and some matters difficult to interpret; but it is not a jumble of unrelated verses like the quatrains of Nostradamus. You don’t have to rearrange all the verses to find meaningful Bible predictions. The sad thing is that there are those who treat the Bible as if it were quatrains to be rearranged at will.

As far as I have seen, Nostradamus says nothing about morality or what life is all about. He seems simply to feed people’s curiosities, with no lasting benefit. Although some treat the Bible, also, as just a book of curiosities, it is far above that. The book of Revelation, and all the Bible, is a guide for life. The Bible tells us where we came from, why we are here, and where we are going. It tells God’s will for our lives today. Have you read it today?