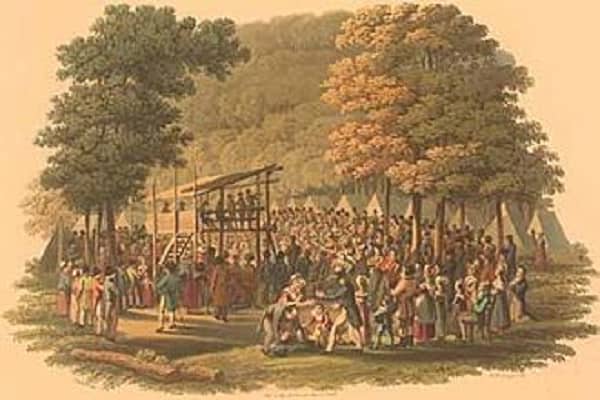 The woman in the wilderness is an intriguing topic of Revelation. In Insight #202, I examined the wilderness persecution of Jesus’ church during the Dark Ages, with the 1,260 years possibly being A.D. 533 to 1793. The emphasis was mainly on the wilderness time. But what can we say about the end of that period when the church came out of the wilderness?

I believe Revelation 12 was predicting, among other things, that although the true church would suffer a long period of obscurity and persecution, yet it would not die out. I believe it teaches that God’s church would always be alive, whether or not we could easily trace her existence. The gates of Hades would not prevail against it (Matt. 16:18). If all of the above is correct, then God’s church was destined to come out of the wilderness around the end of the 18th century. Does this scenario fit historical fact?

Some people believe that the church came out of the wilderness much earlier, with the Protestant Reformation of the 16th century.  A major problem with that view is that the Reformation continued to teach and practice so many errors of Rome. Yes, great strides were made — amazing strides considering the darkness that had abounded for centuries. Yet, basic errors continued to be espoused by the reformers. Human creeds sprang up in spite of the claim of following “solo scriptura” (only scripture). Though the Roman papacy was rejected, state churches abounded. Although the Inquisition was condemned, religious persecution by Protestant State Churches developed. Infant baptism continued. Human names, such as Lutheran, Methodist, Calvinist, and Church of England emerged. In short, great strides were being made, but there needed to be a clearer break from all the errors of Rome. There needed to be a return to the simplicity and purity of the church as revealed in the New Testament.

In the late 1700’s, there began such a movement in the New World of people rejecting all sectarian names, doctrines, and practices, calling themselves only Christians, having no authority but the Bible. With such aims, they began to teach conversion as it is in the NT: requiring faith, repentance, confession, and baptism (immersion) for the remission of sins. They gradually left behind all denominational structures, having each local church of Christ directly under His authority, because He is the one and only Head. Thus, they proclaimed their only headquarters to be in Heaven, rejecting all denominational hierarchy. It is such a movement that I understand to be the church coming out of the wilderness into the open, taking place in an atmosphere of religious freedom.

A brother once sent me an article, proposing that simple churches of Christ came out of the wilderness much earlier than the late 1700’s: specifically, in England in the 1500’s. The article and related materials were very interesting. However, I could not agree that the information presented the church as coming out of the wilderness. In the period of history referred to — yes, there is evidence the church was there — but it was still in the wilderness. As I read, I noticed more than once that those brethren were suffering persecution, meeting in secret, being imprisoned, and the like. That, to me, is still part of being in the wilderness as predicted in Revelation. It was not a matter of open, free, and prospering churches known to the population at large. Rather it was an interesting account of digging deeply into history to find evidence of God’s church still alive although not in public view.

Of course, in the wilderness, hidden from public view, surely does not mean that nobody knew about the Lord’s church during those centuries. Indeed, the beast could not have persecuted the church if the beast knew nothing about it. I mention the beast because the predictions in Revelation 13 and Daniel 7 have the same message, in different terms, as the predictions in Revelation 12. They all refer to the 1,260 years (see Insight 177) of Roman religious domination. So I take all this to mean that the church would pass through a time when it was not widely known, was persecuted, and was not in view to most people and even to most historians. Praise God, that time is past history!