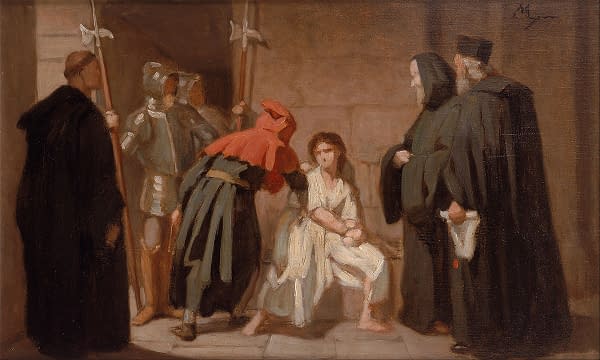 Suffering. Tribulation. Persecution. War. Revelation was written, among other reasons, to alert Christians to the realities of following Jesus. It would not always be easy. The message of Jesus would often stir up trouble. Indeed, John wrote the book while he himself was in exile “for the word of God, and for the testimony of Jesus Christ” (Rev. 1:9). He had just called himself “your brother, and companion in tribulation.”

Revelation predicts periods of tribulation for God’s church as well as periods of God’s fight against Satan’s agents and Satan himself. Revelation 12 includes both elements. First there is a war in heaven, forcing Satan out. However, that is only a partial victory over Satan: “Therefore rejoice, you heavens, and you that dwell in them. Woe to the inhabitants of the earth and of the sea! For the devil is come down unto you, having great wrath” (12:12). The “woman,” the people of God, the church flees into the “wilderness” to escape this new persecution/war.

What period of history is this predicting? Verse 6 mentions 1,260 days. Verse 14 calls the same period “a time, and times, and half a time.”  Insight # 177 delves into these expressions. This same historical time-period is mentioned seven times in Daniel and Revelation. There are various reasons to believe that the period refers to the centuries of the height of papal power, chiefly during the Middle Ages. During those centuries, the people of God, the church of Jesus Christ, was in the wilderness.

The wilderness? The text says the dragon persecuted and made war against the woman. The woman flees into the wilderness “where she is nourished” (verse 14). You get the idea of going into hiding but surviving. In like situations today, we refer to “the underground church.” That surely is the sense of these terms, but referring to days now gone by, during the height of the papal persecutions — the Crusades and the Inquisition.

I believe Revelation 12 teaches, among other things, that the true church would not die out. I believe it teaches (as we now look back), that the church of God existed in the Middle Ages. Jesus’ church was then in the wilderness, hidden from view, persecuted, suffering, but alive. I believe it teaches that God’s church would always be in existence, whether or not the world took notice, whether or not we could easily trace her existence.

Thanks be to God that those centuries of the church worldwide being in the wilderness is past history. Thank God for the freedom of worship we enjoy today in this county. Pray for the underground church suffering today in various countries.