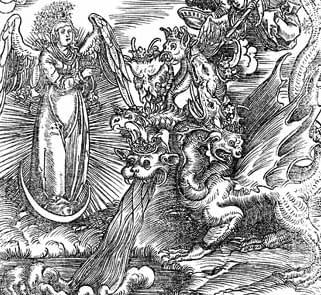 The dragon is right there, waiting to devour the baby as soon as it is born! The baby escapes. Angels battle angels. The dragon pursues the woman. She escapes into the wilderness. What is Rev. 12 talking about, anyway? Surely, the language is symbolic, but of what, of whom?

Seldom does Revelation interpret a symbol, but in this case it clearly does: “The great dragon was cast out, that old serpent, called the Devil, and Satan” (12:9). But some say the dragon is Rome. It is true that Satan works through human agencies. Both the dragon (12:3) and the beast (Rome) (13:1-3) have seven heads and ten horns. However, 13:4 says it was “the dragon which gave power unto the beast” (Rome), proving they are two separate entities. The dragon worked through Rome but was not Rome. Revelation says the dragon is Satan.

Who is the child? Rev. 12:17, speaking of the woman, mentions “the remnant of her seed, which keep the commandments of God, and have the testimony of Jesus Christ.” Thus, the offspring of the woman are Christians. The plural verbs “keep” and “have” reflect the plurality of “the remnant.” This plurality of children is in contrast to the singular “child” of verses 2, 4, 5, and 13.

Singular and plural is not the only difference. In verses 5 and 13, the child is said to be a “man” or “male.” In contrast, throughout Scripture, whenever the people of God as a body are referred to in relation to sex, it is always female. Numerous times in the OT, the people of God are pictured as the wife of God — often, sadly, as an adulteress. In 2 Cor. 11:2, Paul says, “I have espoused you to one husband, that I may present you as a chaste virgin to Christ.” Rev. 19:7 says “the marriage of the Lamb is come, and his wife has made herself ready.” God and Christ are always male. The people of God — as a group — is female.

Rom. 11:16-24 portrays the people of God throughout time as an olive tree: one tree with many branches, some natural, others grafted in. The “good” tree, with root and natural branches, is Israel. Because of unbelief in Christ, some of those branches were cut off, while branches from a “wild” olive tree (gentiles) were grafted in. Thus, one tree comprises the people of God in both OT and NT. This fits the symbol of the woman in Rev. 12 — one woman, representing the people of God in both OT and NT. This view also agrees with Galatians: “If you be Christ’s, then are you Abraham’s seed, and heirs according to the promise” (3:29). Not physical Jews, but believers in Christ, are the descendents of Abraham. The people of God, OT and NT, are one.

Viewing the woman in Rev. 12 as the people of God throughout time resolves the dilemma. God used His people to bring the Messiah into the world; God uses His people to bring new converts into the church. The dragon is Satan, the male child is Jesus, and the woman is the people of God throughout time. This merely identifies, as best I can, the principal players in Rev. 12. But what is the chapter all about? What is taking place? Tune in next time.