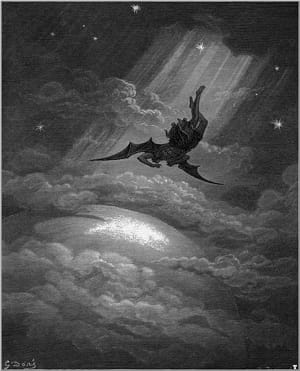 Satan has been our tormenter since the Garden of Eden. Who has not been pierced with his fiery darts! Forget about the Second World War. Forget about the war in Afghanistan. The real war is the one between God and Satan — with each of us right in the middle. Worldly wars have worldly consequences. The spiritual war has eternal consequences.

Revelation 12 pictures the biggest battle of this spiritual war. In Insight #200, the dragon was identified as Satan, the male child as Jesus, and the woman as the people of God throughout the ages. With these identifications in place, verse 4 tells of Satan’s attempt, via Herod, to kill baby Jesus; verse 5 fast-forwards to Jesus’ ascension; and verses 7-11 depict the resulting war in heaven: “There was war in heaven: Michael and his angels fought against the dragon” and “the great dragon was cast out.” The results? “Now is come salvation, and strength, and the kingdom of our God, and the power of his Christ: for the accuser of our brethren is cast down.”

How did heaven win this battle? “They overcame him by the blood of the Lamb, and by the word of their testimony” (verse 11). To the world, and even the apostles, Jesus appeared defeated on the cross. In reality, the cross was the greatest victory in history. As Jesus declared before His death: “Now shall the prince of this world be cast out. And I, if I be lifted up from the earth, will draw all men unto me. This he said, signifying what death he should die” (John 12:31-33). The great love of Jesus in dying for us draws us to Him. His blood cleanses us from our sins. There is wonder-working power in the blood of the Lamb. Praise God!

As first-century disciples announced this Good News of the love of God through the blood of Christ, “they loved not their lives unto the death” (Rev. 12:11). Why not? Well, Jesus had died for them. Also, Hebrews explains that Jesus became flesh like us “that through death he might destroy him that had the power of death, that is, the devil; and deliver them who through fear of death were all their lifetime subject to bondage” (2:14-15). Jesus’ death dealt a devastating blow to Satan and freed us from the fear of death.

Since Rev. 12:10 says “the accuser of our brethren is cast down, who accused them before our God day and night,” Rom. 8:33-34 can say in triumph: “Who shall lay any thing to the charge of God’s elect? It is God that justifies. Who is he that condemns?” Remember Satan accusing Job? According to Rev. 12, Satan was continually accusing God’s children day and night. But through the shed blood of Jesus on the cross, the daily accuser was cast out. With this in mind, Romans asks the rhetorical question: “Who is he that condemns?” Indeed, “there is therefore now no condemnation to them which are in Christ Jesus” (Rom 8:1). Through His shed blood, Jesus was victorious over Satan for us.

Rev. 12:10 points to three events as simultaneous: the casting down of Satan, the arrival of salvation and the arrival of the kingdom. Thus, not only did salvation arrive through the blood of the Lamb, but the kingdom of heaven arrived, just as Dan 2:44 had predicted. This agrees with what John affirmed in Rev. 1:9: “I, John, both your brother and companion in tribulation and in the kingdom.” John declared that he was already in the kingdom. God’s kingdom is here now. Salvation is here now. Satan can no longer accuse the saints of God as he was always doing before Jesus died. That battle was fought and the battle was won — by the blood of the Lamb. Salvation is here now. God’s kingdom is here now. Satan has been cast out of the presence of God.

But the war is still on. Satan has not yet been cast into the lake of fire. Having been cast down to the earth, he persecuted the woman, causing her to flee into the wilderness. Tune in next time.