Insight #214 — Will Earth Be Renovated or Annihilated? 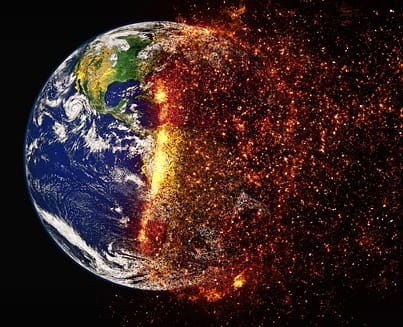 What will the coming destruction of this planet be like? Will the fire predicted be an all-consuming fire or will it be a fire of purification? Will the present cosmos be remade or will it be obliterated to make way for a totally new creation?

Last month we were looking at 2 Peter 3:10-13: “The heavens shall pass away with a great noise, and the elements shall melt with fervent heat, the earth also and the works that are therein shall be burned up… the heavens being on fire shall be dissolved, and the elements shall melt with fervent heat… we, according to his promise, look for new heavens and a new earth.” Some believe this predicts a horrendous nuclear disintegration of the cosmos to make way for a newly created heavens and earth. Others believe it only predicts a fire to purify the present creation.

Those on the other side point out that Peter compares the coming destruction of the world by fire to its former destruction by water. They believe that since the former was not an annihilation of the planet, we should not expect the future destruction to be an annihilation, either. But this view ignores the fact that the earth after the flood was the same cursed earth that it was before. There had been no promise of a new earth, much less new heavens. The two destructions are unlike in many respects.

Another text to be considered is Romans 8:20-22: “The creation was subjected to vanity… in hope that the creation itself also shall be delivered from the bondage of corruption into the liberty of the glory of the children of God.” God cursed the earth when Adam sinned; but this text speaks of the whole creation looking to be delivered from that corruption. In this view, the present cosmos cannot be obliterated to make way for a new one; rather, it must to liberated, renewed, freed from the present condition. This thought is coupled with such expressions as “the restoration of all things” (Acts 3:21), interpreted as the total removal of the curse so the earth can be restored to its original (or even a better) state.

Whatever one’s view of 2 Peter 3 and Romans 8, drastic change is indicated. In either viewpoint, the world as we know it will be no more. It’s just a question of how much God will destroy before making a new heaven and earth. How deep will the fire burn? How much will melt and be dissolved? Will the fire be only surface deep, or will the present cosmos be reduced to primary elements from which a new creation is made? Fire can make something useless even though you can still see it’s form; and fire can totally disintegrate something until all you have is a heap of ashes. Who knows how deeply the fire will burn?

Take your choice; but it might be better to have a wait-and-see attitude. During Jesus’ earthly ministry, although the apostles believed Him to be the predicted Messiah, still they did not understand the nature of the predicted kingdom — or even the necessity of Jesus’ death. You and I today plainly see Jesus’ death  for sin predicted in Isaiah 53. Hindsight is better than foresight. Let’s not be too dogmatic about the exact nature of things when Jesus returns. Drastic change with bliss for God’s people is clear. But the details? Yes, let’s examine Scripture to learn the best we can; but then let’s wait to see how God works it all out.

After all, what difference does it make for us to know ahead of time how much God will destroy before He begins to remold and/or remake. The fact remains that it will be the end of time, the end of probation, the end of the cosmos as we know it, the beginning of eternity. That’s why, in the midst of discussing the coming destruction, Peter admonishes us: “Seeing that these things are thus all to be dissolved, what manner of persons ought you to be in all holy living and godliness” (2 Pet. 3:11) — that’s what makes all the difference!