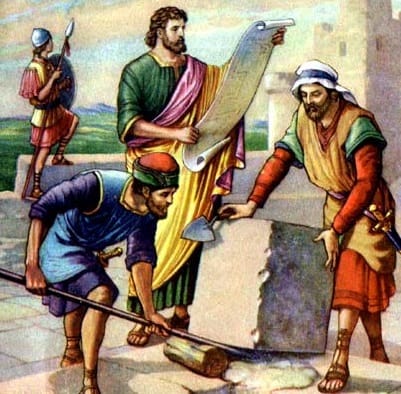 Centuries before Christ, the “weeping prophet,” Jeremiah, predicted that the Jews would one day return to their homeland. After centuries of waiting, in 1948, Israel again became a nation. Jeremiah’s predictions were finally fulfilled. Or were they?

What if we looked at Jeremiah’s predictions in their context? What if we asked ourselves what was going on when Jeremiah wrote? Let’s take a look. The opening verses of the book set the stage. Jeremiah wrote “in the days of Josiah… unto the carrying away of Jerusalem captive” (1:2-3). Jeremiah, the weeping prophet, was all torn up over what was happening before his eyes.

In brief, Jerusalem and Judah were so wicked and so unrepentant that God determined to fulfill the warnings he had given since the days of Moses (Deut. 28). God actually called Nebuchadnezzar, king of Babylon, his “servant” (Jer. 25:9), and said that Judah and other nations would be “perpetual desolations” and would “serve the king of Babylon seventy years” (25:10-11). Before Jeremiah’s eyes, Jerusalem was demolished and those not slain were taken captive to Babylon. They would be in Babylonian Captivity approximately two generations, from 606 to 536 B.C.

Who can doubt that when Jeremiah frequently spoke of return, he was looking at the end of the seventy years? Daniel, taken captive as a youth, clearly understood Jeremiah’s predictions. In old age, “Daniel understood by books the number of the years, whereof the word of the Lord came to Jeremiah the prophet, that he would accomplish seventy years in the desolations of Jerusalem” (Dan. 9:2). Most of Daniel 9 is a moving prayer, begging God to forgive and restore Jerusalem, as He had promised.

When God said through Jeremiah: “I will gather the remnant of my flock out of all countries whither I have driven them, and will bring them again to their folds” (23:3), was he predicting events to be fulfilled in 1948? Hardly. Just a few verses earlier, God had said: “I will give you into the hand of them that seek your life, and into the hand of them whose face you fear, even into the hand of Nebuchadnezzar king of Babylon” (22:25). So when God says in 23:3 that He is going to bring them back to their own land, He is obviously promising their return from the Babylonian captivity.

A similar passage declares: “I will gather you from all the nations, and from all the places whither I have driven you, says the Lord; and I will bring you again into the place whence I caused you to be carried away captive” (Jer. 29:14). Notice the setting of this chapter: “These are the words of the letter that Jeremiah the prophet sent from Jerusalem unto the residue of the elders which were carried away captives… Thus saith the Lord of hosts, the God of Israel, unto all that are carried away captives, whom I have caused to be carried away from Jerusalem unto Babylon… after seventy years be accomplished at Babylon I will visit you, and perform my good word toward you, in causing you to return to this place” (29:1, 4, 10).

In chapter 31, Jeremiah repeats the theme: “He that scattered Israel will gather him… there is hope in your end, says the Lord, that your children shall come again to their own border” (31:10, 17). A few verses later, Jeremiah predicts the New Covenant (31:31-34). These verses are quoted in Hebrews 8 as being fulfilled through Jesus, the Priest and Mediator of the New Covenant. Indeed, is this not the main reason God brought back Israel’s captivity? From Abraham onward (actually, since before before creation), God was preparing the way for the Messiah. Bringing the Jews back to their homeland was just one of the many steps needed to make way for Jesus’ New Covenant.

After all, this is what God’s dealings with the Jews (Israel) was all about. It was not just about them. It was about both them and us. It was about the Gospel for the entire world. As Galatians 3:8 says: “The scripture, foreseeing that God would justify the heathen through faith, preached before the gospel unto Abraham, saying, in thee shall all nations be blessed.” For God to fulfill this promise of blessing all nations — via the gospel — through Abraham, the descendents of Abraham had to return to their land. And they did just that, as Jeremiah had predicted, long before Jesus came to earth the first time.

Tags:Israel in Prophecy
previousInsight #214 — Will Earth Be Renovated or Annihilated?
nextInsight #216 — Was All OT Prophecy Fulfilled by A.D. 70?