Insight #217 — When Was Roman Empire Broken? 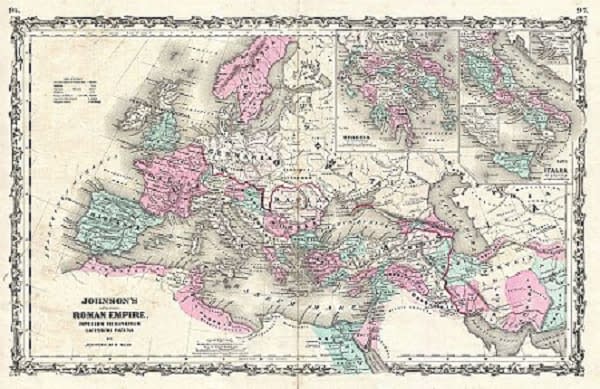 Let’s take a look at Daniel 2, with its awesome image predicting four kingdoms: Babylon, Persia, Greece, and Rome, followed by the kingdom of God (the church), which was to be established “in the days of these kings,” that is, during the Roman Empire. This Insight takes all this for granted. The question here is whether the predictions in Daniel 2 extend beyond the first century.

Verses 34, 35, 44, and 45 say: “A stone was cut out without hands, which smote the image… and brake them to pieces. Then was the iron, the clay, the brass, the silver, and the gold, broken to pieces together… and the wind carried them away… the God of heaven set up a kingdom, which shall never be destroyed… it shall break in pieces and consume all these kingdoms… it brake in pieces the iron, the brass, the clay, the silver, and the gold.”

Four times in four verses it says that the image would be broken in pieces by the stone. While the first four kingdoms were earthly, the fifth is spiritual. Thus, we may ask if the breaking was to be physical or spiritual. Would God’s kingdom overcome the Roman Empire by force of arms? Or would Rome be broken by the Sword of the Spirit, the Word of God? And, when would it happen?

Here are two texts that might apply. Acts 17:6 says: “These that have turned the world upside down are come hither also,” thus speaking of the church striking at the very heart of the Roman — and/or the Jewish — way of life. The statement is hyperbole spoken by Jews seeking legal action against the Christians. The gospel was making an impact; but Rome was far from being broken; she was barely beginning to learn what Christianity was all about. Then, Col. 1:23 says: “the gospel… which was preached to every creature which is under heaven.” Yes, preached all over the world by the time Paul wrote this, around A.D. 60; but it was a relatively small minority that had accepted the gospel by that time.

On the contrary, the pagan Roman Empire reached the height of its prosperity and power in the second century and it heavily persecuted God’s church on into the start of the fourth. It was in the fourth century that Rome finally lost the battle. Following the most horrific of all the Roman persecutions under Diocletian, Christianity gained legality under Constantine, A. D. 306-337. This was really turning the world upside down; all kinds of laws and actions were taken in favor of Christianity and against paganism. It seems that the “breaking in pieces” either took place spiritually at that time with the overthrow of official paganism, or else it took place physically with the fall of the western Roman Empire in A.D. 476, at which time the Empire was literally broken in pieces.

By the fourth century, the steadfastness of the Christians in the face of untold hardships caused a religious-cultural-political upheaval — not by force of arms, but by peacefully resisting Rome’s force of arms. Official Roman paganism was crushed. The stone smashed pagan Rome. The actual political and military fall of Rome happened a century and a half later. I do not see how anyone can consider the Roman Empire as broken in pieces in any sense of these words until one or both of these historical situations developed. The fulfillment of breaking in pieces the awesome image was not fulfilled in the first century. That’s how I see it; how about you?