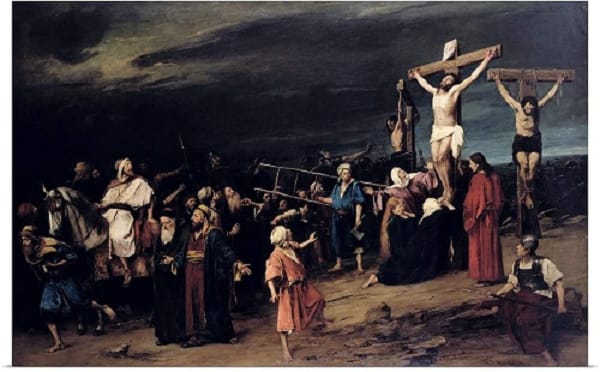 Here is an interesting prediction by Zechariah: “I will pour upon the house of David, and upon the inhabitants of Jerusalem, the spirit of grace and of supplications: and they shall look upon me whom they have pierced, and they shall mourn for him, as one mourns for his only son” (12:10). When will (or was) this prediction fulfilled?

Rev. 1:7 comes to mind: “He comes with clouds; and every eye shall see him, and they also which pierced him: and all kindreds of the earth shall wail because of him.” Sounds like Zechariah. Those who pierced him will see him and mourn. Could this be predicting a massive Jewish conversion when Jesus returns?

With Rev. 1:7, dispensationalists (futurists, for short) abandon their claimed literal interpretation of Scripture. They teach that those who pressured Pilate to crucify Jesus will not be resurrected when Jesus comes; they will be in hell and not resurrected for a thousand years. Instead, they say, the living “representatives” of those Jews who sought Jesus’ death will be the ones to see him. That is hardly a literal interpretation of “every eye shall see him, and they also which pierced him.”

In addition, futurism opens the door for a second-chance salvation at Jesus’ second coming. They say the mourning in Rev. 1:7 is a mourning of repentance leading to salvation. This is a topic in itself. Suffice it today to quote just one text: “The Lord Jesus shall be revealed from heaven with his mighty angels, in flaming fire taking vengeance on them that know not God, and that obey not the gospel of our Lord Jesus Christ: who shall be punished with everlasting destruction from the presence of the Lord, and from the glory of his power; when he shall come to be glorified in his saints” (2 Thess. 1:7-10).

The idea that Zech. 12:10 will somehow be fulfilled at the second coming misses the mark in any case. While it is true that Rev. 1:7 “sounds” like it might be the fulfillment, the Gospel of John says otherwise: “One of the soldiers with a spear pierced his side, and forthwith came there out blood and water… these things were done, that the scripture should be fulfilled, A bone of him shall not be broken. And again another scripture says, They shall look on him whom they pierced” (John 19:34-37).

With this confirmation of first-century fulfillment, let’s look at other details in Zechariah. In 12:10, it says that God will “pour upon the house of David, and upon the inhabitants of Jerusalem, the spirit of grace… and they shall look upon me whom they have pierced, and they shall mourn for him.” Verses 11-14 repeatedly say the mourning is of “every family apart,” which seems to emphasize the individuality of the mourning. The next verse (13:1) says: “In that day there shall be a fountain opened to the house of David and to the inhabitants of Jerusalem for sin and for uncleanness.” Praise the Lord! That’s why we sing: “There is a fountain filled with blood, Drawn from Immanuel’s veins; And sinners, plunged beneath that flood, Lose all their guilty stains.”

Israel did look upon “Me whom they have pierced,” and they mourned for Him, and God poured out grace upon them. Fifty days after the piercing, Peter proclaimed: “Let all the house of Israel know assuredly, that God has made that same Jesus, whom you have crucified, both Lord and Christ. Now when they heard this, they were pricked in their heart, and said unto Peter and to the rest of the apostles, Men and brethren, what shall we do? Then Peter said unto them, Repent, and be baptized every one of you in the name of Jesus Christ for the remission of sins, and you shall receive the gift of the Holy Spirit” (Acts 2:36-38).

What a glorious new beginning for Israel! The people of Israel, mourning because they had crucified Jesus, were offered grace and forgiveness for their sin. Three thousand responded at the first offer; and their number in Jerusalem kept multiplying. Zechariah was wonderfully fulfilled. For two thousand years, all Jews have had the opportunity to avail themselves of the grace and cleansing from sin poured out by the pierced One. However, when He returns, the mourning will be because it is too late.
That’s how I see it. How about you?

Tags:Jesus' Connection to Others
previousInsight #218 — New Heavens and Earth Here Now?
nextInsight #220 — “Soon” and “Near” in Revelation