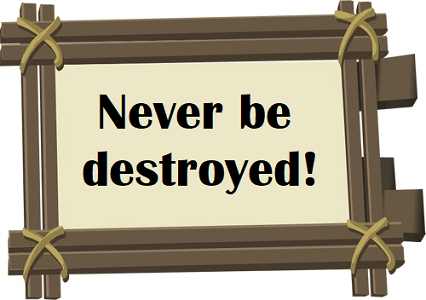 Daniel 2:44 predicted that God’s Kingdom would be set up during “the days of these kings,” speaking of the fourth empire, which history shows was Rome. Jesus came during the Roman Empire, preaching: “The time is fulfilled, and the kingdom of God is at hand” (Mark 1:15). Later, Jesus told His disciples: “There be some of them that stand here, which shall not taste of death, till they have seen the kingdom of God come with power” (Mark 9:1). It all points to God’s Kingdom being established in the first century.

Many who read these Insights have long understood this truth: namely, that the Kingdom of God is here now, and that Jesus’ church is the Kingdom of God. Even Tim LaHaye, the staunch futurist and co-author of the Left Behind series, says of Jesus: “He came the first time to establish a spiritual kingdom, to which one gains entrance by being born again” (“Revelation Unveiled,” pg. 265). Amen!

In the great resurrection chapter, Paul told the Corinthians: “Flesh and blood cannot inherit the kingdom of God” (1 Cor. 15:50). Obviously, this is speaking of the kingdom as something in the future, after the resurrection. In Acts 14:22, Paul told Christian brethren: “We must through much tribulation enter into the kingdom of God.” Later, Paul told Timothy: “The Lord shall deliver me from every evil work, and will preserve me unto his heavenly kingdom” (2 Tim. 4:18). Also, 2 Peter 1:11 says: “For so an entrance shall be ministered unto you abundantly into the everlasting kingdom of our Lord and Savior Jesus Christ.”

Such texts clearly speak of the kingdom as something future. The future kingdom is referred to as both heavenly and eternal (neither earthly nor millennial). These texts thus agree with the prophecy of Daniel: “the God of heaven set up a kingdom, which shall never be destroyed:.. it shall stand for ever” (2:44). The angel Gabriel told Mary the same thing: “of his kingdom there shall be no end” (Luke 1:33).

If we take just some texts, we can prove that the kingdom is here now. If we take a limited number of other texts we can prove that the kingdom is in the future. But if we deal with the subject correctly, by considering all that Scripture has to say on the matter, we have to conclude that the kingdom is now here in one sense and yet future in another sense. Call it “two phases” of the same kingdom, or however you want to describe or explain it, both truths must be accepted. The Kingdom of God has already been established; but we await a future far more glorious phase of the Kingdom. That’s how I see it. How about you?

Tags:Other Kingdom Prophecies
previousInsight #225 — Roman Catholic View
nextInsight #227 — “Why Have You Forsaken Me?”