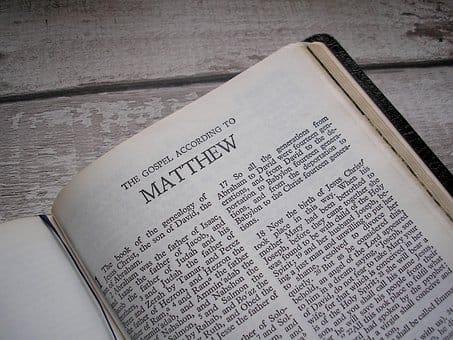 Does the Bible ever contradict itself? Sometimes, on the surface, it seems so. But, much of life is like that. Even in science. Two high-school students were arguing about the temperature at which water boils. Joe did the experiment in his kitchen and found it boils at 212 degrees Fahrenheit. Barry did the experiment in his kitchen with a result of 203 degrees F. Which one was right? Both! We need more facts to clear up the seeming contradiction. Joe lives in New York City; Barry lives in Denver, Colorado. NYC is at sea level. Denver is a mile high. If you have ever cooked at a high altitude, you know all about it: water boils at a lower temperature the higher you go. Superficially, 212 and 203 cannot both be right. Given more facts, the seeming discrepancy disappears.

So it is with many supposed contradictions in the Bible. A case in point is the genealogical record of Jesus. On the surface, Matthew and Luke contradict each other. Look at all the facts, and the difference is explained.

Matthew begins his account of Jesus’ life this way: “The book of the generation of Jesus Christ, the Son of David.” To a Jew of the first century, such words were ripe with meaning. They proclaimed Jesus to be the fulfillment of prophecy. They proclaimed Him to be the long-awaited King, descendant of David. Genealogical proof was important.

Two of the four Gospels offer this proof, howbeit in different forms. Matthew records the ancestral line from Abraham going forward to Jesus. Luke (3:23-38) runs in the opposite direction, starting with Jesus, and going all the way back to Adam. The difference in direction is no problem. Only one record going back to Adam is no problem, inasmuch as the two records agree (in opposite directions) from Abraham to David. The problem arises in the list of ancestors between David and Jesus, precisely the point to be proven. There the two records differ. How can this be?

Central to the seeming discrepancy is the fact that, among the Jews, the ancestral line was always via the father. A biological mother might be mentioned in a genealogy, but only for some special interest in her person, not for making any connection to her ancestors. For example, in Matt. 1:3-6, four mothers are mentioned, yet the line is through the fathers. Take Ruth as an example. In verse 5 she is mentioned as the mother of Obed, but no mention is made of her ancestors. Rather the line comes through the ancestors of Obed’s father, Boaz.

Now in the case of Jesus, because he was born of a virgin, he had no biological father. Thus, his ancestral line could not be registered in the normal Jewish way. What then? Although not identical, there is an example in the OT Law where the ancestral line might be imputed to a man who was not the biological father. This can be seen in the following text: “Moses said, If a man die, having no children, his brother shall marry his wife, and raise up seed unto his brother” (Matt. 22:24). So, the child thus born was considered a descendent, not of the biological father, but of his dead childless brother.

The case of Joseph is similar in that he was not the biological father. Rather, he was the adoptive father! To those who knew the family (but did not know the miraculous circumstances of Jesus’ birth), Joseph was considered Jesus’ father. For example: see Luke 4:22. In the United States today, most adopted children are given amended birth certificates that have only the names of their adoptive parents. That’s virtually the same case as that of Joseph. Being the adoptive father, it would be important to show that Joseph was of the house of David.

On the other hand, since Jesus physically/biologically was the son of Mary, it would be important that she also be of the house of David. In short, if both Joseph and Mary were descendents of David, Jesus would be “the Son of David” both legally and biologically. With these thoughts in mind, let’s look closer at the two genealogical records.

Notice that Luke’s nativity account is written from Mary’s perspective: Gabriel appears to Mary to announce the birth of Jesus without her “knowing” a man. Then when Mary goes to visit Elizabeth, the unborn John the Baptist hears Mary’s voice and leaps for joy in his mother’s womb. At this point Elizabeth calls Mary “the mother of my Lord.” Matthew’s account, on the other hand, is from the viewpoint of Joseph: an angel appears to Joseph to explain to him what has happened to Mary, so that Joseph will not break the engagement but rather proceed to marry Mary. This he does, and later, after the visit of the wise men, it is Joseph who is warned by an angel to flee with Mary and Jesus into Egypt.

Is this a little convoluted? Perhaps. But this is because the Jews’ always recorded genealogies thru the father. I know of no other way to harmonize Matthew and Luke. On the contrary, with this explanation in mind, we obtain a more complete picture of Jesus’ physical ancestry, establishing that both Mary and Joseph were of the house of David. Jesus, in his physical existence on this planet, was the Son of David both biologically through Mary and legally through Joseph.

On the surface, Matthew and Luke contradict each other. In actuality, the difference between the two, when examined carefully, gives the fullest possible data to prove that Jesus was indeed the predicted Son of David. Whenever a contradiction in the Bible is alleged, seek further facts. Remember: cooking in Denver is not the same as cooking in NYC.