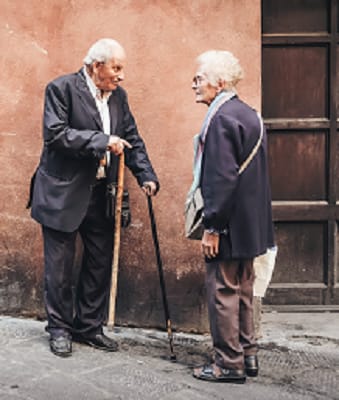 We joke about it. “Over the hill.” “A sign of old age.” “Look at all those candles; call the fire department.”

We deny it. Like a man who let’s everyone know he is not a grandpa; he’s an uncle. Never mind he’s married to the grandma.

Life expectancy has risen from around 40 years in the latter 19th century to above 80 years in some countries today. We are back to life expectancy as it was in Moses’ time: “The days of our years are seventy; and if by reason of strength they be eighty” (Psalm 90:10). Yes, it was Moses, not David, who wrote that Psalm. “By reason of strength…” Moses himself had that strength, reaching 120 years of age, barely surpassing today’s world record.

Golden years? More like rusty years. Grow old gracefully? False teeth, hearing aids, and a cane are not so graceful. Not to mention arthritis, Alzheimer’s, and nursing homes. As the song goes: “Oh, the old gray mare, she ain’t what she used to be.”

Old age brings unavoidable changes. The time came when the slayer of Goliath was told to leave the battle field: “David… and his servants… fought against the Philistines: and David waxed faint… Then the men of David swore unto him, saying, You shall go no more out with us to battle, that you quench not the light of Israel” (2 Sam. 21:15-17). The great warrior became too old for battle.

Baseball players are “done” between 30 and 40; other activities at varying ages. In the first century, in 1 Tim. 5, Paul said young widows should remarry, while widows over 60 could be supported by the church — with qualifications, including: “if she have brought up children, if she have lodged strangers, if she have washed the saints’ feet.” She was a very busy lady. The only present tense activity Paul mentions is praying. In the past, she took care of others, but now others take care of her. Now she can hardly cook for herself or bathe herself. The exact age varies with time, place, and conditions, but the growing disabilities will surely come.

That’s what Ecclesiastes 12 is all about. Verses 2-6 are highly figurative about body parts wearing out. The inevitable is next: “Then shall the dust return to the earth as it was: and the spirit shall return unto God who gave it” (12:7). Verse 1 exhorts: “Remember now your Creator in the days of your youth, while the evil days come not, nor the years draw nigh, when you shall say, I have no pleasure in them.” “Have no pleasure in them.” Many of us have already entered those years. Things which once were a joy may now be a drag. Not all pleasure is gone; but many things we once enjoyed have no more attraction. It can be partly from boredom: “been there, done that.” But it can also be a lack of the necessary energy, for example, to enjoy a live concert that does not even start until 8:30 pm, which is nearly bed time.

And there’s 2 Cor. 4:16: “Though our outward man perish, yet the inward man is renewed day by day.” Our body parts wear out one by one like the parts of an old car. But, hopefully, we are fulfilling the later part: being renewed daily in the inner man. Truthfully, that can be a struggle; but, as we grow older we need to work at it, as we get closer and closer to our heavenly home.

What is your attitude toward old age, whether of yourself or others? “You shall rise up before the hoary [gray] head, and honor the face of the old man” (Lev. 19:32). “The hoary [gray] head is a crown of glory” (Prov. 16:31). Hardly a good sales pitch for Clairol. Prov. 23:22 exhorts: “despise not your mother when she is old.” “Likewise, you younger, submit yourselves unto the elder. Yea, all of you be subject one to another” (1 Peter 5:5).

We simply are not called upon to pretend we are still in the vigor of youth when we are old. Remember the song, “Give of your best to the Master”? And then what? “Give of the strength of your youth.” Hopefully, when we are older, though our physical strength is less, our wisdom and understanding are our strength. It is not a shame to grow old. Our Maker made life to be that way; so I think He can accept the reality of our old age. Can we? Do we?

You may have seen or heard the Senior Version of Jesus Loves Me. Here’s just a part of it; you can find the rest online:

Jesus loves me, this I know,
Though my hair is white as snow.
Though my sight is growing dim,
Still He bids me trust in Him.
(Chorus)
Though my steps are oh, so slow,
With my hand in His I’ll go
On through life, let come what may,
He’ll be there to lead the way.
(Chorus)