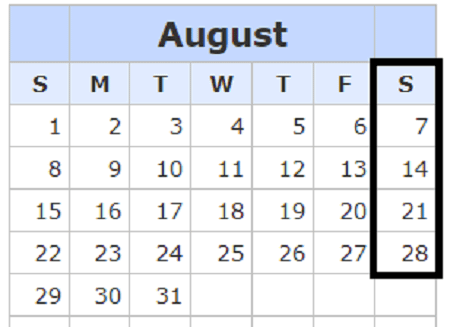 “The seventh day is the Sabbath of the Lord your God: in it you shall not do any work, you, nor your son, nor your daughter, your manservant, nor your maidservant, nor your cattle, nor your stranger that is within your gates” (Ex. 20:10). This is a very humanitarian idea to give not only your own body a day of rest every week, but also to give rest to everybody else in your house, even the animals.

To Whom Was the Sabbath Given?

In Gen. 2:3, God indeed “blessed the seventh day and sanctified it”; but nowhere in Genesis does God command anyone to keep the Sabbath. The first time that “Sabbath” is mentioned is Ex. 16:23-36. Verse 29 says, “The Lord has given you the Sabbath.” Who is “you”? The answer follows in verses 31-32: “The house of Israel,” whom God had brought “out from the land of Egypt.”

Shortly thereafter, the Ten Commandments were given. Note the introduction: “I am the Lord your God, which have brought you out of the land of Egypt” (Ex. 20:2). The fourth command of the ten (20:8-11) gives the well-known reason for resting on the Sabbath: “For in six days the Lord made heaven and earth… and rested the seventh day.” However, in the parallel text, another reason is given: “Remember that you were a servant in the land of Egypt, and that the Lord your God brought you out… therefore the Lord your God commanded you to keep the Sabbath day” (Deut. 5:15). Clearly the Sabbath command was given to the children of Israel shortly after God brought them out of slavery in Egypt.

But Was the Sabbath Also Given to the Gentiles?

The Sabbath command did include provision for the stranger “that is within your gates” (Ex. 20:10). The law also made provision for “when a stranger shall sojourn with you” to keep the Passover and be circumcised (Ex. 12:48-49). Thus the Old Covenant permitted foreigners to live among the children of Israel and become a part of them.

However, God never commanded the children of Israel to go into all the world and preach the law of Moses to every creature. Quite the contrary, God said of seven nations: “You shall smite them and utterly destroy them” (Deut. 7:1-6). Why? “For you are a holy people to the Lord your God… a special people unto himself above all people that are on the face of the earth.” Psalm 147:19-20 further adds: “He shows his word unto Jacob, His statutes and His judgments unto Israel. He has not dealt so with any nation.” Gentiles, outside the borders of Israel were never commanded to keep the Sabbath.

The Lord of the Sabbath

Jesus called himself the “Lord also of the Sabbath” (Mark 2:28). Did He mean He would always be the Lord of the Sabbath? A look at a similar case can help clarify the matter.

Jesus called the temple in Jerusalem “My Father’s house” (John 2:16). Does this prove that the temple would always be His Father’s house? Not at all. When Jesus died on the cross, “the veil of the temple was rent in two from the top to the bottom” (Matt. 27:50-51). With this divine act, God terminated His ownership of the temple. Jesus’ blood had replaced animal sacrifices. Not only that, but since A.D. 70, the temple hasn’t even existed to be able to be God’s house. Just as the temple being God’s house was not permanent, so Jesus’ being the Lord of the Sabbath was not permanent, except insofar as He is Lord of everything.

Does Jesus’ statement in Matt. 24:20 prove that Christians would be keeping the Sabbath in A.D. 70: “pray you that your flight be not… on the Sabbath day.” Keep in mind that Jesus had earlier taught that it was lawful “to save life” on the Sabbath (Mark 3:1-6). So to flee on the Sabbath would not be an issue, unless…

… unless violent Sabbath-keepers got in the way. The Sabbath-keepers at that time would be the Jews who did not believe in Jesus. If the Jews strictly kept the Sabbath, the gates of the city would be closed (Neh. 13:19). The unbelieving Jews could not only refuse to let Christians leave the city, they could even attempt to kill them, just as they attempted with Jesus because, in their eyes, he broke the Sabbath (John 5:18).

“Christ also suffered for us, leaving us an example, that you should follow his steps” (1 Peter 2:21). What does this mean? Are we to do everything Jesus did? Must we move to Palestine? Must we be carpenters? Must we fast 40 days? Must we walk on water?

The answers are obvious. But there are other cases that are not so obvious. Consider feet washing. The key here is in the word “example.” Jesus did not say that feet-washing was a command. After He washed dirty feet, Jesus said: “I have given you an example” (John 13:15). The math student who simply copies the examples given, instead of applying them to the problems of the test, fails the test. If I wash someone’s clean feet, I fail the test. Jesus did not command a ceremony. Rather, he gave an “example” of loving service.

Many things Jesus did were the result of his living under the OT law. For example, He kept the Passover, both as a youth and as an adult (Luke 2:41-42; Mark 14:12-14). Since we do not live under the Law, we do not follow that example today.

Paul Visited Synagogues on the Sabbath

The book of Acts belongs to the New Covenant. Why, then, does it tell of Paul preaching on the Sabbath? Romans 1:16 gives a clue when it declares that the gospel is God’s power “to the Jew first, and also to the Greek.” Paul followed that plan. In Antioch, on the second Sabbath that Paul preached in the synagogue, the Jews who did not believe opposed Paul. Paul then explained: “It was necessary that the word of God should first have been spoken to you: but seeing you put it from you… we turn to the Gentiles” (Acts 13:46).

In Acts 17:1-3, in Thessalonica: “where was a synagogue of the Jews: and Paul, as his manner was, went in unto them, and three Sabbath days reasoned with them out of the scriptures, opening and alleging, that Christ must needs have suffered…” Sometimes, as in this case, the persecution became so strong that “the brethren immediately sent away Paul and Silas by night unto Berea” (17:10). In less severe cases, as in Ephesus, when many Jews in the synagogue refused to believe, Paul simply “departed from them, and separated the disciples, disputing daily in the school of one Tyrannus” (19:9).

The Sabbath Was Nailed to the Cross

From Romans to Revelation, there is neither command nor example to keep the Sabbath. In fact, there is only one text in which the word “Sabbath” appears: Col. 2:16.

And the fact is that Col. 2:13-17 teaches the opposite of Sabbath-keeping. It tells us that we are no longer obligated to keep Sabbaths, because they were taken away by Christ on the cross. Because the various OT ordinances were taken out of the way, the text continues: “Let no man therefore judge you in meat, or in drink, or in respect of an holy day (feast day, festival) or of the new moon or of the Sabbath days” (2:16).

This text lists three classes of holy days: feast day, new moon, and Sabbath. Seven times on the OT, we have the same three-fold listing. For example, 2 Chron. 31:3 says: “the burnt offerings for the Sabbaths, and for the new moons, and for the set feasts.” Whether the lists start or end with the Sabbath, a common listing of the Jewish holy days is three-fold: yearly, monthly, and weekly. The listing in Col. 2, therefore, is not a new concept. Rather, it was a well-known expression: the common way to list all the Jewish holy days: the yearly, the monthly and the weekly.

That the term “feasts,” in such verses, refers to the yearly holy days is confirmed in 2 Chron. 8:13: “on the Sabbaths, and on the new moons, and on the solemn feasts, three times in the year.” The term “Sabbaths” refers to the weekly holy days, as can be seen in Ezekiel 46. When verse 1 mentions the Sabbath, it is clarified to mean the seventh day: “the six working days; but on the Sabbath…” And note that verses 1 and 9 refer to “the new moon” and “the solemn feasts,” thus giving the same three-fold division of Col. 2, just more spread out.

Col. 2:14 says of “the handwriting of ordinances,” that Christ  “took it out of the way, nailing it to his cross.” Verse 16 gives examples of some of those things contained in the handwriting that were nailed to the cross. Among the items listed is “Sabbath.” Colossians thus teaches that Christ took away the commandment to keep the seventh day of the week. Christ nailed the fourth commandment to the cross, along with all the rest of the Law.

The Sabbath a Shadow

Colossians 2 says more: the Sabbath, along with many things in the OT, was “a shadow of things to come; but the body is of Christ” (2:16-17). The substance, the reality, belongs to Christ. The Sabbath was a shadow (a figure, a symbol) of that reality. Since the major command of the Sabbath was to rest, we would expect that it foreshadowed rest in the NT.

For the correct understanding of this shadow, we read in Heb 4:9: “There remains therefore a rest to the people of God.” But the rest that remains for the Christian today is not a command (of the seventh day or of any other day). Rather, according to 4:1: “a promise being left us of entering into his rest.” The wicked will “have no rest day nor night.” But as for the righteous: “Blessed are the dead which die in the Lord… that they may rest from their labors” (Rev. 14:11,13). The OT seventh day rest was a shadow, which was nailed to the cross. The reality will be our eternal rest with Christ Jesus! Praise His Name!

Tags:Old vs. New Testament
previousInsight #238 — Ten Commandments Binding Today?
nextInsight #240 — Which Is the First Book of the NT?