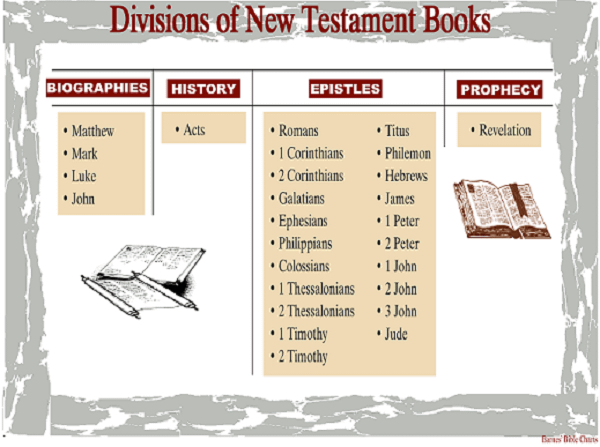 Any Bible student knows there are 39 books in the Old Testament and 27 in the New, making a total of 66. Right? Even small children know that the first four books of the New Testament are Matthew, Mark, Luke and John. Right?

But, wait a minute. Do the four Gospels really belong to the New Testament? Does the New Testament really begin with the birth of Jesus? The most obvious answer is to be found in the very word “testament.” A last will and testament is a document which goes into effect after a person dies.

Hebrews 9:16-17 says: “For where a testament is, there must also of necessity be the death of the testator… it is of no strength at all while the testator lives.” Christ Jesus had to die before His New Testament could take effect.

But the New Testament did not enter into force the very moment Jesus died. Even with human wills, there is a period of time and certain legal procedures, after the death of the testator, before the provisions of the will can be carried out. The same is true with Jesus’ “last will and testament.”

The basis for the Gospel is “that Christ died for our sins… that he was buried, and that he rose again” (1 Cor. 15:1-4). Verses 14-19 teach powerfully that without the resurrection, Jesus’ death was in vain: “If Christ be not risen, then is our preaching vain, and your faith is also vain… you are yet in your sins.” So the New Testament could not start as soon as Jesus died. He had to rise!

But there is more!

Jesus is High Priest. Hebrews 7:24-25 says He “has an unchangeable priesthood. Wherefore he is able also to save them to the uttermost.” Priesthood involves saving us. But, when did Jesus become High Priest?

Hebrews continues: “We have such an high priest, who is set on the right hand of the throne of the Majesty in the heavens… if he were on earth, he would not be a priest” (8:1, 4). For Jesus to become High Priest (and thus Savior), he had to return to heaven.

But even Jesus’ ascension was not enough. Shortly before his death, Jesus told the twelve: “I have yet many things to say unto you… when he, the Spirit of truth, is come, he will guide you into all truth” (John 16:12-13). Then before ascending, Jesus told the apostles “that they should not depart from Jerusalem, but wait for the promise of the Father… you shall be baptized with the Holy Spirit not many days hence” (Acts 1:4-5).

Jesus’ promise was fulfilled ten days later (Acts 2). Baptized with the Holy Spirit, the apostles had divine authority to preach the Good News. For the first time, men and women entered into the New Covenant of Christ Jesus.

In summary, five things were necessary for the New Testament (Covenant) to actually enter into force: 1) the death, 2) the burial, 3) the resurrection, 4) the ascension, and 5) the baptism with the Holy Spirit on the day of Pentecost. It is in Acts 2, then, that the New Testament in reality begins to function.

A Time of Transition

Let’s see this in relation to the Sabbath. It was Jesus’ custom to go to the synagogue on the Sabbath (Luke 4:16). While Jesus walked this earth, He was “Lord even of the Sabbath day” (Matt. 12:8). But it must be understood that such statements about the Sabbath are found in the four Gospels because Jesus lived under the Old Testament. “God sent forth his Son, made of a woman, made under the law” (Gal. 4:4). Living under the Law, Jesus had to keep the Law.

After Jesus’ death, some women “rested the sabbath day according to the commandment” (Luke 23:56). But, as we have seen, Jesus death, by itself, did not take away sin. He had to rise! In like manner, His death alone could not end the old law and bring in the new. He had to rise! When the women rested, Jesus was still dead! The time of transition was not yet finished.

By His death, burial, resurrection and ascension, and by His sending the Holy Spirit, Christ made possible His glorious New Testament. Before He completed all this, it could not begin. From Acts 2 forward, we are clearly in the era of the New Testament.

As Jesus’ body hung on the cross, He was the victim of cutting insults: “He saved others; himself he cannot save” (Matt. 27:42). Jesus’ life seemed to be ending in failure and disgrace. The mockers had their own ideas of how Jesus should save himself: “If you be the Son of God, come down from the cross” (verse 40).

Jesus’ disciples also had negative thoughts about His death. Why were the two disciples on the road to Emmaus “sad”? (Luke 24:13-35). “We hoped that it was he who should redeem Israel” (verse 21). These good men had lost the great hope which they once had in Jesus. Their “Redeemer” was dead!

Neither the mockers nor the disciples understood that Jesus was indeed going to save Himself! But not according to their ideas. Rather, He was going to rise from the dead. The great resurrection chapter, 1 Corinthians 15, emphasizes the futility of it all if Jesus had remained dead. “if Christ be not risen, then is our preaching vain, and your faith is also vain… you are yet in your sins!” (verses 14, 17). But verse 20 triumphantly says: “But now is Christ risen from the dead”! Bad news became good news! “Gospel” means “good news.”

Acts 2 is a pivotal chapter in the Bible. Before Acts 2, the old covenant was in force. After Acts 2, the new covenant is in force. The new covenant (testament) could not come into force until Jesus died, was buried, rose, ascended, and sent the Holy Spirit upon the apostles on that day of Pentecost.