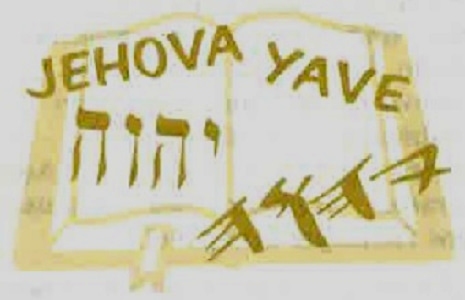 Not only is “Jehovah” not in your New Testament, it likely is not even in your Old Testament. Where does the name come from? Why is it not found in most English Bibles, and then only in the Old Testament? What do the “Jehovah’s Witnesses” say?

The Divine Name in the Old Testament

Today, nobody knows how to pronounce this Name. Many scholars believe that “Yahweh” is much closer to the correct pronunciation. Hebrew was originally written with only consonants. Sometime in the ancient past, scribes began adding small vowel points, mainly under the consonants. However, the scribes did not place the correct vowel marks on the name YHWH. Why? There was a false over-reverence for the name, a fear that they or Gentiles might be guilty of taking God’s name in vain. Thus, instead of placing the correct vowel points on YHWH, they placed the vowel points for the Hebrew word “Lord.” When the Scripture was read aloud, instead of pronouncing YHWH, a person would say “Adonai” (Lord).

Today, some English Old Testaments render YHWH as “Jehovah.” But most English Bibles, following the practice of the Jewish scribes, render the divine name as “Lord.” Most English Bibles let you know when the text has YHWH, because they print it with all caps, instead of upper and lower case. Notice in your Bible, for example, Psalm 23:1: “The LORD is my shepherd…”

The Divine Name in the New Testament

The situation of this Divine Name is drastically different in the New Testament. Whereas the Name appears well over 6.000 times in the Hebrew OT, it does not appear once in the Greek NT. This is true even when the New quotes the Old. The Greek NT neither uses the Hebrew letters, nor does it transliterate the four letters, nor does it translate the Name. Rather, the NT writers, similar to the Jewish scribes, use the term “Lord” (kurios) in such cases.

How can we know that the name “Jehovah” is not found in the Greek manuscripts of the NT? A simple way is to examine the English Bibles available today, such as the King James Version, the New King James Version, the New American Standard Bible, the New International Version, the New American Bible, and the New Revised Standard Version. The fact is that none of the scholars who produced these versions ‒ with their knowledge of Greek and having various religious views ‒ none of them have once put the name “Jehovah” into these English New Testaments. This, in itself, is a strong indication that the Hebrew Divine Name has no support in the Greek NT.

Scholars have access to well over 5,000 Greek manuscripts of the NT, ranging from fragments to complete copies. No ancient book comes close to the NT in number and age of manuscripts. For example, there exist today only 266 manuscripts of Plato’s works.

It is true that there are various differences between the many Greek manuscripts. But, most of these differences deal with simple things such as misspelled words, changes in the order of words, etc. If you have a Bible with good footnotes, it will tell you of significant differences found in various manuscripts. For example, footnotes on Matt. 22 tell you that some manuscripts have the words “without cause,” and others do not. You will never find a footnote in the NT saying that some manuscripts have the word “Jehovah” or any equivalent, and some do not.

With all that said, in the year 1950, a New Testament was published which contains the name “Jehovah” 237 times. This New World Translation was published by the Watchtower Bible and Tract Society (Brooklyn, NY), by those who call themselves “Jehovah’s Witnesses.” On pages 1454-57 of a 1961 copy of the complete New World Translation, there is a “concordance of all the places in this translation where the name ‘Jehovah’ occurs in the Christian Greek Scriptures” (their New Testament). Notice that they do not say “in the Greek manuscripts.” Rather, they honestly say that the name Jehovah occurs “in this translation.”

What justification does the Watchtower Society give for placing “Jehovah” 237 times in their version of the NT? Today there are available printed Greek texts of the NT with word-for-word English translations under each Greek word. The Watchtower Society published such a Greek text in 1969, entitled: The Kingdom Interlinear Translation of the Greek Scriptures. The Greek text they use does not contain “Jehovah,” or any equivalent. Every time they have “Jehovah” in their English translation, you can look at the interlinear portion. There you will find the Greek word “kurios” and under it, the correct translation: “Lord.” This fact is clearly stated in the book’s Forward: “One of the remarkable facts, not only about the extant manuscripts of the original text, but of many versions, ancient and modern, is the absence of the divine name.” Absolutely. If there were any evidence to the contrary, the Watchtower Society would be the first to announce it. They were honest in not putting the name “Jehovah” in the Greek text in their book. They only put it in their English translation.

After such clear truth, their Forward offers arguments for placing “Jehovah” in their English translation. The arguments are based mainly on the presence of the Divine Name in various translations of the Hebrew OT into Greek, and also of the Greek NT into Hebrew. The strongest point made is that some manuscripts of the Septuagint (OT in Greek) contain the Divine Name in Hebrew, while others use “Kurios.” They deduce that the original Septuagint contained the divine name, while later copyists tampered with the text, changing it to “Kurios” (Lord). Whether such a deduction is defensible or not, note that the argument begins with manuscript evidence. But where is manuscript evidence for making the same claim about the original Greek NT? There is none, as they admit.

Who Has Tampered with the Bible?

With the above deductions as their defense, the Forward says: “The evidence is, therefore, that the original text [the ancient manuscripts] of the Christian Greek Scriptures has been tampered with.” Really? Who did the tampering? Among the early Christians there were many learned men, neither ignorant nor naive, very zealous for the truth. Intelligently, they upheld the truth handed down from the apostles, and they exposed erroneous innovations in doctrine. Irenaeus, born a mere 20 to 30 years after the death of the apostle John, wrote five books Against Heresies. In his first book, he denounces Marcion, who “mutilates” Scripture. He tells how Marcion removed sections from Luke and the epistles of Paul in order to uphold his Gnostic doctrines (Heresies 1.27.2). In the fifth book, he discusses how some manuscripts read “616” in Rev. 13:18, whereas “the most approved and ancient copies” have “666” (Heresies 5.30.1).

In other words, the early Christians were aware of differences in various manuscripts of the Christian Greek Scriptures. They were aware of and strongly denounced purposeful tampering with Scripture. They knew what was going on with God’s Word. They defended the apostles’ doctrine.

Is it possible that all our 5,000-plus Greek manuscripts (far more than any ancient book) have been falsified these 237 times, obliterating the original readings? Considering how early educated Christians fought against perversions of Scripture, is it possible that there was such a major tampering with God’s Word without any Christian noticing it and denouncing it?

There Has Been a Change

One of the first things a person has to learn about the Bible in order to properly understand and interpret it is to take into account the great differences between the OT and the New. Much of the book of Hebrews is dedicated to this theme. The third chapter of 2 Corinthians offers a very compelling case for the superiority of the New Covenant over the Old.

Among the many differences between the Old and New is the fact that the Old was given to one nation: Israel. In Deut. 4:8 God asked Israel a rhetorical question: “What nation is there so great, that has statutes and judgments so righteous as all this law, which I set before you this day?” In contrast, the New is for the entire world: “Go therefore, and teach all nations” (Matt. 28:19).

Another great difference is in the matter under discussion: the name of God in the two testaments. The Hebrew name of God, YHWH, appears over 6,000 times in the Hebrew OT. In contrast, this name does not appear one time in the Greek NT, either by way of translation or transliteration. Even when quoting the OT Hebrew, it is rendered “Lord,” following the example of the vowel pointing by the OT scribes. Since the inspired NT writers quoted the OT in this manner, it seems clear that the tetragrammaton was always only to be known in Hebrew as the name of God for the Hebrew nation. It was never intended to be universal. It’s total absence in the NT is a clear proof of this.

Then, how is God identified in the NT? John 1:18 can help us: “No man has seen God at any time; the only begotten Son, who is in the bosom of the Father, he has declared him.” This verse tells of a “Father,” and a “Son,” realities virtually unknown before that time. In the OT, God was hardly ever identified as “Father,” whereas in the NT God is called “Father” over 250 times. The OT mentions “Son of God” (singular), only one time, whereas the NT speaks of “Son of God” nearly 50 times, without counting the times that it simply says “Son,” as in the example above and in the famous John 3:16. “Holy Spirit” is found only three times in the OT, but over 90 times in the NT. The baptism that Jesus commands is “in the name of the Father, and of the Son, and of the Holy Spirit” (Matt. 28:19).

The Significance of the Change

Knowing God as Jehovah/Yahweh/YHWH in Hebrew is replaced by knowing God as Father, Son, and Holy Spirit. “No man has seen God at any time; the only begotten Son, who is in the bosom of the Father, he has declared him.” Through Jesus we see God as never before. Many people see only a God of wrath in the OT. They miss the various ways His love is shown in those bygone days. However, it is true that nothing in the OT can compare with “God so loved the world, that he gave his only begotten Son, that whosoever believes in him should not perish, but have everlasting life” (John 3:16). Think also of the intimacy involved. We think of Jehovah/Yahweh is the awesome God of creation, the ruler of the universe, etc., which He surely is. But, in Father, Son, and Holy Spirit, we have God as one close to us, like a loving Father and Jesus as close brother. Thank God for all the revelation we have of God through His Son, Jesus Christ.

“For you know the grace of our Lord Jesus Christ, that, though he was rich, yet for your sakes he became poor, that you through his poverty might be rich… For what the law could not do, in that it was weak through the flesh, God sending his own Son in the likeness of sinful flesh, and for sin, condemned sin in the flesh… Christ died for our sins according to the scriptures… Worthy is the Lamb that was slain to receive power, and riches, and wisdom, and strength, and honor, and glory, and blessing… But now is Christ risen from the dead, and become the first fruits of them that slept… our Savior Jesus Christ, who has abolished death, and has brought life and immortality to light through the gospel… thanks be to God, who gives us the victory through our Lord Jesus Christ” (2 Cor. 8:9; Rom. 8:3; 1 Cor. 15:3; Rev. 5:12; 1 Cor. 15:20; 2 Tim. 1:10; 1 Cor. 15:57).

Tags:False ProphetsOld vs. New Testament
previousInsight #241 — What’s So Special about Sunday? (in-depth study)
nextInsight #243 — Are We All Created the Same?