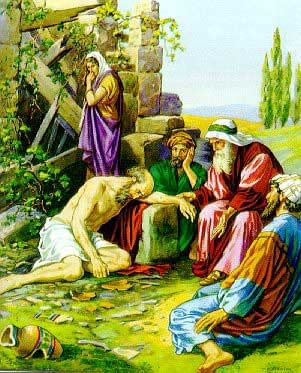 Have you ever felt abandoned by God and wished you had never been born? You’re in good company. I think we may fail to grasp the extent of Job’s suffering. We may quote, “The Lord gave and the Lord has taken away. Blessed be the name of the Lord” (Job 1:21). But that is only at the beginning of Job’s suffering.

Before proceeding, let’s review God’s evaluation of Job. James 5:11 says, “You have heard of the endurance (patience) of Job.” Two times in Ezekiel 14 God condemns the wickedness of the land, saying that even if three righteous men were in it, the land would still be punished. The three would only save themselves. Who are the three? Noah, Daniel, and Job.

The Depth of Job’s Suffering

Have you ever had a sore itching/hurting so bad that you couldn’t keep from scratching it? Job was covered with such sores. Fingernails were not enough. He scratched with a broken piece of pottery. We often castigate his “friends” for their unhelpful rebukes. But when his friends first arrived, “they lifted up their eyes at a distance and did not recognize him, they raised their voices and wept… Then they sat down on the ground with him for seven days and seven nights with no one speaking a word to him, for they saw that his pain was very great” (Job 2:12-13).

Job spoke first: “Let the day perish on which I was to be born… Let not God above care for it… Let those curse it who curse the day… Why did I not die at birth… Why did the knees receive me, and why the breasts, that I should suck?… Why is light given to him who suffers, and life to the bitter of soul, who long for death, but there is none” (Job 3:3-21).

There is not the slightest indication that Job contemplated suicide. In spite of all his suffering, he had deep faith in God and knew that life was in God’s hands. He fully recognized that God is God, that God is the Almighty. “How can a man be in the right before God? If one wished to dispute with Him, he could not answer Him once in a thousand times… Who has defied Him without harm?… Who could say to Him, ‘What are You doing?’ ” (Job 9:2-12).

In spite of bitterness, Job neither denied nor cursed God. Nor did he pray “beautiful,” insincere prayers. Rather, he openly made his complaint to God: “I will speak in the bitterness of my soul. I will say to God, ‘Do not condemn me; let me know why You contend with me… Your hands fashioned and made me altogether, and would You destroy me?’ ” (Job 10:1-2, 8).

My beloved Margaret was a woman of great faith. Two months after 9/11, we were scheduled for our third trip to Belarus to teach the Word. Before leaving, someone asked if we still planned to fly. Margaret’s reply was two-fold. In the first place, the chances of a repeat were slim. In the second place, she said, “If they blow up the plane, I know where I’m going!”

Years later, Margaret was suffering with increasing limitations and unrelenting pain. She grieved that she couldn’t complete her latest children’s Bible course. She went from walker to wheelchair. She experienced increasing difficulty in feeding herself and even swallowing. All kinds of remedies were tried to ease her pain, until she finally accepted prescription narcotics. Still not enough.

In that situation more than once, Margaret cried out, “Where is God?” Margaret was ready to die; she wanted to die. Why did it have to go on and on? Where was God? As I look back, actually her suffering was short compared to many others.

“Where was God?” I had no neat answers. Some time after the Lord took her home, it came to my mind to examine the Psalms. I seemed to remember that such an outcry was very much a theme of that great book. Here are a few verses that stand out.

“How long, O Lord? Will You forget me forever?
How long will You hide Your face from me?
How long shall I take counsel in my soul,
Having sorrow in my heart all the day?” (13:1-2).

“For Your sake we are killed all day long;
We are considered as sheep to be slaughtered.
Arouse Yourself, why do You sleep, O Lord?
Awake, do not reject us forever.
Why do You hide Your face
And forget our affliction and our oppression?” (44:22-24).

“Will the Lord reject forever?
And will He never be favorable again?
Has His lovingkindness ceased forever?
Has His promise come to an end forever?” (77:7-8).

Lots of questions, yes; but no denial of God, no cursing God.

What We Have That Job Did Not

The first thing that Job did not have was the book of Job! We do not know who wrote the book nor when – or if – Job learned in this life why he had to suffer so. At the time of his suffering, he did not know he was a pawn in the great conflict between God and Satan. Neither he nor his friends knew that his suffering was not because he was so evil, but because he was so good!

Job did not have the comfort and power of Romans 8:28: “We know that God causes all things to work together for good to those who love God.” “Good,” I take it, according to God’s definition, not ours. “Work together,” I take it, in due time – maybe even only with eternity in view.

Nor does Romans 8 promise an easy life. It even quotes from Psalm 44, as I did above: “Just as it is written, ‘for your sake we are being put to death all day long; we were considered as sheep to be slaughtered.’ ” But then Romans 8 continues: “But in all these things we overwhelmingly conquer through Him who loved us. For I am convinced that neither death, nor life, nor angels, nor principalities, nor things present, nor things to come, nor powers, nor height, nor depth, nor any other created thing, will be able to separate us from the love of God, which is in Christ Jesus our Lord” (vss. 36-39). Wonderful!

Be aware that these precious verses are not promising a life of comfort and ease. The Psalm quoted makes that clear. The NT does not promise an end to suffering, sickness, pain, and agony in this life. Such promises are reserved for the new heavens and new earth (Rev. 21:1-4). What is promised is that God the Father, the Lord Jesus Christ, and the Holy Spirit will be near us.

But even if we do not feel His presence, even if we feel forgotten, even if we “desire to depart and be with Christ, for that is very much better” (Phil. 1:23), nevertheless, He is near and loves us.